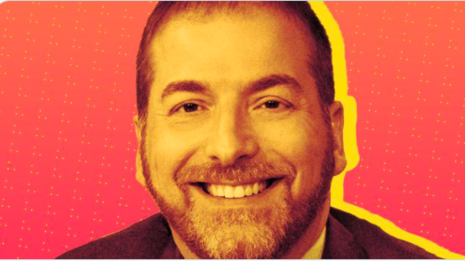 NBC Meet the Press host Chuck Todd gave a friendly interview to a fellow liberal and doubled down on NBC anchor Lester Holt’s new mantra that “fairness is overrated.” Balance is fake, people “need the truth.”

The interviewer was Nilay Patel of TheVerge.com — owned by Vox Media, which is partially owned by Comcast, which owns NBC.

Midway through the transcript, Todd was on his usual old spiel that secular big-city journalists are a little tone-deaf to religious people, but that’s not to be categorized as “left/right,” but as “urban/rural.” But that fiend Roger Ailes exploited that divide at Fox News to create a somehow false sense of liberal, pro-Democrat bias!  Todd thinks they should have fought this harder:

We ended up in this both-sides trope. We bought into the idea that, oh my God, we’re perceived as having a liberal bias. And I think for particularly the first decade of the century, I’d say mainstream media overcorrected. And we bought into the Fox motto of “balance.” And it’s like, Jesus, there’s no balance, they need the truth. There’s fairness, that’s different than balance. And so in that sense, this is why we’re in this defensive posture today.

Yes, this is a sign you’re a secular big-city liberal, when you use “Jesus” as an exclamation point. But the really side-splitting part is “mainstream media overcorrected.” That’s hilarious. They NEVER bought into the Fox motto of balance. They have fought it tooth and nail since 1996.

We’re still stuck in that trite garbage about “bias is in the eye of the beholder.”

I am hanging my hat on a couple of things, particularly with Gen Z, I think it’s the partisan media that has created the larger trust problem we have in media, right? The biggest media outlet on cable is the least factually correct, Fox News.

And so I always sit there and say, when people say, “Is the news media biased?” It’s like, well, the number one cable channel is the most biased news organization in America. So of course, most people are saying yes. And yet, the right views that answer as somehow, it’s about us in the mainstream media. So it really is, I think, eye of the beholder and unfortunately, cable news has done this.

I’m hanging my hat on that Gen Z is a lot less ideological and a lot more realistic.

Chuck Todd thinks being “a lot less ideological and a lot more realistic” means you’re a natural fan of Chuck Todd and NBC. They describe themselves as the “mainstream,” and as the “honest” brokers who provide “truth.”