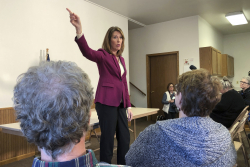 Iowa Rep. Cindy Axne, one of the most vulnerable Democratic incumbents heading toward the 2022 midterm elections, spent an early July afternoon talking to constituents’ from the cool environs of an ice cream shop in her district when the discussion suddenly heated up.

“I just wanted to ask, are you concerned about the rising gas prices and the rise in the cost of consumer goods here in Iowa and in America?” one constituent asked.

“You know what, here’s the deal: They’re comparing costs against last year,” she responded. “I’d say that we’ve had a few things increase because we were in the middle of COVID, so no, I’m not concerned about false advertisement.”

Just days earlier, over the July Fourth weekend, Republicans had run a digital media campaign targeting Axne and 10 other vulnerable House Democratic seats over the rising costs of “burgers, buns, propane and gas.”

“This year, your Fourth of July is more expensive because Democrats’ harmful economic policies are making everyday goods cost more,” the ad’s narrator said, urging viewers to call Axne and tell her: “We can’t afford this.”

Two days later, in an interview with a Des Moines television station, the two-term congresswoman flatly dismissed the idea that the economy is experiencing inflation. “We’re not even remotely close to a point to say that we’re at rising inflation,” she said, arguing that the country needs “to wait ’til we have an actual, an expert, who says that’s what’s happening. … Right now, we’ve been able to, you know, keep inflation from being a big issue.”

Over the past month, Axne had plenty of company as several of her vulnerable Democratic brethren awkwardly fielded questions about this year’s rising costs of goods and services while defending plans to pass trillions of dollars more in infrastructure and anti-poverty funding. All the spending, along with a $1.9 trillion pandemic relief stimulus bill passed earlier this year, is pushing up demand and prices and will only exacerbate an already overheated economy, many economists have warned.

Rep. Sean Patrick Maloney, who chairs the Democratic Congressional Campaign Committee, struggled to play down inflation as short-term issue, along with labor shortages, using the analogy of turning water back on in a previously frozen pipe. “You turn them back on for the first time — it coughs and spits a little bit,” he told constituents at a town-hall gathering in mid-July.

The argument mirrors one President Biden recently made when he said of inflation: “The overwhelming consensus is it’s going to pop up and little bit and then go back down.”

The only problem? Last week, Federal Reserve Chairman Jerome Powell warned that inflation “could turn out to be higher and more persistent than we expected.” He softened those remarks afterward by stressing that he believes “the economy has made progress” toward the Fed’s goals of reaching maximum employment and getting inflation back on track to be slightly higher than 2% annually.

Meanwhile, Rep. Katie Porter, a top target of Republicans who represents a district in California’s traditionally more conservative Orange County, readily acknowledged rising inflation, predicting it would extend into next year — though she promoted the importance of the child tax credit to help offset those costs.

“As a mom of three, I’m pretty sure that shoes, clothes and Cinnamon Toast Crunch aren’t gonna magically get cheaper next year,” she remarked during a July 12 town-hall.

The jumbled July responses and flat-out denials came with a political cost for Democrats, senior party strategists argue. Nearly six in 10 Americans believe that Biden administration economic policies are to blame for the 13-year high in inflation, according to a Politico/Morning Consult poll released Wednesday.

The House is now out on a seven-week recess, and national Democratic messaging gurus want to avoid a repeat performance. In a confidential memo delivered to party leaders, strategists for Build Back Together, a dark-money group formed to promote Biden’s agenda, called the GOP’s inflation attack ads the most powerful critique of his proposals “to date.” Citing focus-group findings, the memo specifically referenced the National Republican Congressional Campaign’s July Fourth weekend ads.

“Notably, they did more damage with this ad than nearly any other conservative ad tested, and they were able to do it in [15 seconds] instead of the typical [30 seconds],” said the memo, first reported by the Washington Post.

Since those GOP spots ran one month ago, the inflation picture has grown bleaker. A July 13 Bureau of Labor Statistics report showed inflation rising across the country and the consumer price index jumping 0.9%, the largest one-month increase since 2008.

The only way to counter the Republican broadsides, Democratic strategists warn, is to play up the practical benefits of the spending packages because many Americans are not familiar with them even though they generally poll well.

A June poll from Monmouth University backs up that advice. It found a majority of the American public supports the spending despite concerns that it could result in long-term inflation. The COVID-19 stimulus package passed in March garnered 60% support, while 68% percent of respondents backed some type of infrastructure package and 61% said Congress should expand access to health care, college, paid leave and other services, parts of the larger $3.5 trillion “infrastructure of care” package Democrats are considering passing on their own.

Democrats are capitalizing on this support by hammering Republicans, the vast majority of whom have opposed popular stimulus bills. For instance, no House or Senate Republicans voted in favor of the $1.9 trillion COVID-19 stimulus bill, which passed Congress in March through the budget reconciliation process, a procedural path around the supermajority requirement in the Senate.

The Democratic Congressional Campaign Committee on Friday issued a statement blasting GOP candidate Tom Kean Jr. for refusing to take a position on that bill, as well as a program in New Jersey giving a $500 tax rebate to middle- and low-income families. Kean is in a rematch against Rep. Tom Malinowski, who he came within one percentage point of ousting last year.

When the House passed an infrastructure bill July 1, which formed the basis for the Senate bipartisan compromise measure working its way through the upper chamber, only two House Republicans voted in favor of it: Reps. Chris Smith and Brian Fitzpatrick. Smith is a long-serving lawmaker with a well-known independent streak, while Fitzpatrick has been a top Democratic target for the past two election cycles who survived last year even when his suburban Philadelphia district voted for Biden.

On the Senate side, 17 Republicans last week voted with all 50 Democrats to advance the infrastructure deal in a win for Biden and a bipartisan group of negotiators. The two most vulnerable GOP senators, Ron Johnson of Wisconsin and Marco Rubio of Florida, were among the “no” votes, which could help them ward off GOP primary challengers.

Former President Trump has been seething over the last week about Senate Republicans negotiating with Democrats for an infrastructure bill he pursued throughout his time in office but couldn’t get passed. Accusing Republicans of “caving” on the deal, Trump has threatened to back primary opponents to any Republican who votes in favor of it. But Capitol Hill is mostly shrugging off the threat: Of the 17 Republicans who voted to advance the measure, only one, Lisa Murkowski, is running for reelection next year. And she has proved to be tough to knock off: In 2010, the daughter of former senator and governor Frank Murkowski proved she could win as a write-in candidate after losing her primary.

Johnson is one of the Trump’s most stalwart supporters even though he represents the battleground state of Wisconsin, which Biden narrowly won. Last week, the two-term senator said he didn’t understand why any Republican “would be complicit” in cutting an infrastructure deal knowing that Democrats plan to pass a subsequent, multitrillion-dollar spending bill filled with money for social programs, fighting climate change and raising taxes on the wealthy.

Democrats’ ability to pass the second, more expensive infrastructure bill on their own became far less likely this week when Sen. Kyrsten Sinema joined Sen. Joe Manchin in opposing the price tag. All Senate Democrats would have to vote for the budget reconciliation bill for it to pass the 50-50 chamber with Vice President Kamala Harris casting the tie-breaking vote. Both Democrats said they would work in the coming months to pare down the measure’s cost, but it could still end up with a hefty top-line.

If Democrats succeed in passing the costly legislation on their own, and inflation remains high into the coming year, Johnson’s and Rubio’s recent moves could prove prescient and help them retain their seats.

The Monmouth survey carried a warning about the next massive spending bills Democrats are planning to pass without GOP votes. Support for new spending bills slipped to 46% if Democrats do so unilaterally without bipartisan backing.