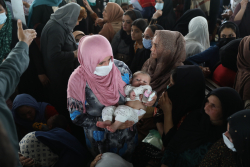 An Afghanistan under Taliban rule means death and destruction for Afghan women and girls. These are the same women and girls the United States spent two decades working to empower and equip for lives of freedom and self-sufficient success. It is sickening to think of them at the mercy of the Taliban. It is shameful to think we have betrayed our allies in such a disastrous way and frightening to observe the incompetence of the current administration.

When women are actively involved and respected in their communities, those communities are more stable.  After the 9/11 terror attacks, the Bush administration emphasized that women’s empowerment in Afghanistan and throughout the Middle East would lead to a less threatening and more stable region. It was in our country’s best interest to continue to help make that happen.

In a 2001 radio address, first lady Laura Bush aptly said that this fight was “for the rights and dignity of women.” She traveled to meet with Afghan women and girls to hear about their thirst for education and opportunity. Together with USAID, Mrs. Bush launched the American University of Afghanistan.

Since then, the United States Agency for International Development says student enrollment grew from 900,000 male students to more than 9.5 million students, 39% of whom are girls. The Center for Strategic and International Studies confirmed that “literacy rates, GDP per capita, women’s rights, the ability of girls to go to school” have vastly improved in the last 20 years. That’s the sort of freedom Americans have brought.

Endangering them all is President Biden’s decision to pull our troops to meet an artificial and political deadline of the 20th anniversary of 9/11. This decision begs this crucial question: Do the rights and dignity of Afghan women matter less than those of American women? We believe they do not.

During the Bush administration, the International Women’s Issues Office at the U.S. State Department created the International Women of Courage Award. This award recognizes women from around the globe who have demonstrated exceptional courage and leadership in advocating for justice, women’s empowerment, and human rights. The women are typically celebrated in March and brought to Washington to receive recognition.

During the early years, we specifically chose two women from Afghanistan to highlight the plight of women there and to celebrate their strength and resilience. We wanted their example to give hope to other Afghans and show that change is possible. Just this past March, Secretary of State Antony Blinken presented the honorary International Women of Courage Award posthumously to seven Afghan women who were assassinated in 2020 while serving their communities.

Their stories are vivid examples that under Taliban rule, women will be slaughtered or sent back to the Dark Ages.

Gen. Sharmila Frough, the head of the Gender Unit in the National Directorate of Security (NDS) was one of the longest-serving female NDS officers, having served as chief of the anti-kidnapping division and working undercover combating criminal networks. Gen. Frough was assassinated in an IED explosion targeting her vehicle in March 2020 in Kabul.

Maryam Noorzad was a midwife who served remote locations in Wardak and Bamyan provinces before working for Médecins Sans Frontières Kabul PD13 hospital. On May 12, 2020, three gunmen attacked the maternity ward of the hospital, but Maryam refused to leave her patient, who was in labor. The two women, and the patient’s newborn baby, were killed in the delivery suite.

Fatima Rajabi was a 23-year-old police officer originally from Ghazni Province and a member of the anti-narcotics division. She was traveling to her home village in Jaghori district in a civilian minibus in July 2020 when the Taliban stopped the vehicle and took her captive. Two weeks later, the Taliban killed her and sent her remains, which had gunshot wounds and signs of torture, to her family.

It is hard to believe the Biden administration was honoring these Afghan women just a few months ago and today has left them behind. There are many more who will be targeted and killed as the Taliban continues to exert control over Afghanistan. This administration and Congress must act immediately to prioritize emergency assistance and safe passage to these Afghan women and girls. We cannot ignore the brutality that is the Taliban.

Andrea Bottner is the founder of Bottner Strategies and was the director of the International Women’s Issues Office at the U.S. State Department during the George W. Bush administration.