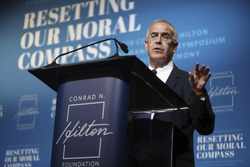 To grasp the left’s rage and the right’s embitterment, it is useful to keep in mind a major asymmetry that marks the nation’s long-standing culture wars: The right tends to know the left better than the left knows the right.

Notwithstanding the occasional risible protestation, progressives dominate the mainstream media, the entertainment industry, Silicon Valley, the K-12 education establishment, and the universities. This means that progressive ideas, progressive sentiments, and progressive tastes pervade the culture. Denizens of red America need only turn on the TV, watch Hollywood movies, listen to popular music, follow major league sports, or send their kids to public schools and most any college or university in the country to encounter progressives’ flattering self-portraits and their airbrushed depictions of the progressive spirit in action. In contrast, residents of blue America generally only know of red America through the condescending lens of progressive reporting, opining, and imagining.

In the absence of unusual exertions, blue America operates based on a caricature of red America. A dramatic expression of progressives’ unfamiliarity with the interests and outlook of roughly half of their fellow citizens was the failure of the elite news media — whose job, it was long thought, was to inform the nation—to anticipate even the possibility of a Donald Trump victory in the 2016 Republican primaries and his subsequent defeat of Hillary Clinton in the general election. Another prominent example was their inability to explain how, despite a global pandemic and his manifest shortcomings, President Trump was able to increase his total number of votes in 2020, attract more African American and Latino votes than he had four years before, and come within 44,000 votes in three states of winning the Electoral College a second time.

Early in 2016, as Trump emerged as the favorite to win the Republican nomination, New York Times columnist David Brooks honorably recognized the limitations of his understanding of the nation he had covered for more than three decades. In March of that year, in a column headlined “No, Not Trump, Not Ever,” Brooks offered a mea culpa. Along with most of the experts, he had “expected Trump to fizzle because we were not socially intermingled with his supporters and did not listen carefully enough.” Although Brooks conveyed the obligatory contempt for Trump in that column, he also pledged to listen more carefully and learn more about America: “For me, it’s a lesson that I have to change the way I do my job if I’m going to report accurately on this country.”

Brooks deserves considerable credit for refining his analysis of blue America. In “How the Bobos Broke America,” posted online at The Atlantic earlier this month, he parted company with the elite media’s standard view that the country’s polarized politics is rooted primarily in red America’s implacable racism, sexism, and nativism. Rather, he explained, blue America’s conquest of the commanding heights of culture and the contempt it rains down on red America below have destabilized the nation.

But there are limits to how far Brooks is willing to break with his class. He is listening more carefully, yes, but largely still to blue America. While revising his anodyne assessment of progressive elites’ impact on the culture war, he continues to recycle their clichés about red America. He rightly calls out identity politics and the racial-grievance movement as weapons wielded by cultural elites to exclude the uninitiated. But he disregards the role of the syntheses of Marxism and postmodernism in promoting ignorance of American history and in replacing education with indoctrination. His well-intentioned policy proposals to scale back progressive domination, moreover, reflect — and are bound to reinforce — the very presumption on the part of blue America to rule that he decries.

Twenty years ago, Brooks published the best-selling “Bobos in Paradise.” With trenchant wit and genial empathy, he explored the synthesis of meritocratic entitlement and counterculture pretention that marked the new upper class. Today, Brooks acknowledges that he overlooked how the “super-educated urban elite” — the nickname “bobo” derives from bourgeois concern for social status and financial security coupled with bohemian disdain for tradition and convention — would exacerbate social divisions and status consciousness.

This progressive elite — described by Paul Fussell in 1983 as “the X class,” by Richard Florida as “the creative class” in the early 2000s, and more recently by David Goodhart as the “anywheres” (as opposed to the “somewheres”) and by Gadi Taub as the “mobiles” (as opposed to the “stationaries”) — generated “inequality and social conflict,” observes Brooks. “As the bobos achieved a sort of stranglehold on the economy, the culture, and even our understanding of what a good life is, no wonder society has begun to array itself against them,” he writes. American politics “has become sharper-edged, more identity-based, and more reactionary, in part because politics is the one arena in which the bobos cannot dominate — there aren’t enough of us.”

The “global backlash” to the ascendancy of progressive elites is, according to Brooks, “not without basis.” But in his telling, the backlash has gotten out of hand, “growing more and more vicious, deranged, and apocalyptic” and precipitating a “populist right” that is “intellectually bankrupt.” Despite the mental illness and zealotry he attributes to the people, Brooks concedes that progressive elites are the aggressors. They “have coalesced into an insular, intermarrying Brahmin elite that dominates culture, media, education, and tech,” he writes. “Worse, those of us in this class have had a hard time admitting our power, much less using it responsibly.”

Part of the responsible use of power consists of grasping power’s temptations. With the hindsight of 20 years, Brooks realizes that he “didn’t anticipate how aggressively we would move to assert our cultural dominance, the way we would seek to impose elite values through speech and thought codes.” He also “underestimated the way the creative class would successfully raise barriers around itself to protect its economic privilege — not just through schooling, but through zoning regulations that keep home values high, professional-certification structures that keep doctors’ and lawyers’ incomes high while blocking competition from nurses and paralegals, and more.” And he “underestimated our intolerance of ideological diversity.”

Despite these admirable insights into where the progressive elites — and his analysis of progressive elites — went astray, Brooks remains attached to progressives’ soothing sense of moral superiority. Although he provides no evidence, he sees “a lot of truth” in the belief that the people’s inveterate racism and aversion to change exacerbate their reaction to elite arrogance and overreach. Given his apprecation of his flawed track record over the last two decades — and his empirically backed observation that progressive elites have become among the most parochial and politically intolerant of Americans — one might have expected Brooks to examine the partisan interests served by casually accusing the non-elites of clinging to their racism.

Brooks finds an answer to the nation’s class wars in President Biden’s “working-class progressivism.” The president’s “legislative package,” Brooks maintains, “would narrow the income gaps that breed much of today’s class animosity.” He also proposes “institutional reform” involving “pathways to success” outside of elite universities; national service that brings together Americans from different classes; and elimination of “policies like residential zoning rules that keep the affluent segregated on top.”

For Brooks, though, these are stopgap measures. He calls for “transforming our whole moral ecology, such that possession of a Stanford degree is no longer seen as signifying a higher level of being.” This entails nothing less, Brooks concludes, than that progressive elites muster the wherewithal “to dismantle the system that raised us.”

The very ambition to remake the nation’s moral ecology and dismantle the meritocracy, however, shows that for all his salutary recognition that progressive elites’ drive polarization, David Brooks remains enthralled by their dream of enacting laws and managing public policy to reengineer the economy and society and remake citizens’ souls. There is not a word in his essay about how the nation can afford Biden’s economic agenda — a $1 trillion infrastructure bill passed by the Senate with Republican support along with a $3.5 trillion budget — on top of the nation’s skyrocketing national debt. Brooks refers to progressive intolerance but shows scant recognition that the education establishment’s mobilization of K-12 schools along with colleges and universities to teach students to see race and oppression everywhere divides the nation by falsifying the historical record and distorting contemporary reality. He leaves the impression that blue America has little to learn from red America other than that progressives’ abuse of their massive cultural power has brought out the worst in those on the right. And he fails to see that a basic commitment to individual freedom and human equality, rooted in the nation’s governing institutions and still palpable in the public spirit, offers the common foundation on which the elites and the people can productively join issue and share responsibility for governing the nation.

The left still has a long way to go to understand the right and what ails America.

Peter Berkowitz is the Tad and Dianne Taube senior fellow at the Hoover Institution, Stanford University. In 2019 and 2020, he served as Director of Policy Planning at the U.S. State Department. His writings are posted at PeterBerkowitz.com and he can be followed on Twitter @BerkowitzPeter.