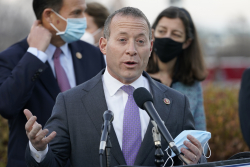 If not for the chaos in Afghanistan, the threat of Hurricane Henri and the deadly spread of the COVID-19 delta variant, more attention would be paid to the standoff between House moderate and progressive factions, which is coming to a head this week. The outcome may determine the fate of Joe Biden’s presidency more than any of the crises now dominating the headlines.

Earlier this month the Senate passed a traditional infrastructure bill with 19 Republicans joining 50 Democrats, then a budget resolution on a razor-thin party-line vote. The resolution sketches out the Democrats’ $3.5 trillion plan to invest in what Democrats call “human infrastructure”—including universal preschool, free community college and subsidized long-term elder care—though it is not binding legislation. For Democrats to circumvent a Senate filibuster and pass such an ambitious bill, they must use a process known as budget reconciliation. And that requires first passing a budget resolution before drafting a reconciliation bill—which Democrats prefer to call the “Build Back Better plan” rather using than a musty procedural term.

Monday night, the House is expected to vote on whether to advance both the bipartisan bill and the budget resolution with a procedural vote known as a “rule,” setting the terms of floor debate and allowing Speaker Nancy Pelosi to bring the bills to the floor for a final vote. However on Tuesday, assuming the rule passes, Pelosi is only planning on bringing the budget resolution to the floor, keeping the bipartisan bill on the shelf for the time being. It is on these votes where the intra-party battle will be settled.

Why are they making dueling demands? To gain leverage.

With the Democratic margins so narrow in both congressional chambers, only a few moderate holdouts are needed to force the rest of the Democrats to cut down the size of the Build Back Better plan. (Sen. Kyrsten Sinema of Arizona has already said unequivocally that she won’t vote for a $3.5 reconciliation bill, and in a 50-50 Senate, she has the leverage to follow through on that threat all by herself.)

But those same moderates, several of whom represent swing districts, are eager to vote for a rare bipartisan bill and inoculate themselves from being accused of excessive partisanship. So progressives have reasoned if they withhold support for the moderates’ prized bill, they will gain enough leverage to thwart any moderate stinginess.
The progressive reasoning may have missed a key element of the moderates’ predicament. They badly want to pass a bipartisan bill in part so they can tell their swing voter constituents that they helped enact a bipartisan bill. Procedurally yoking the Senate’s infrastructure to the Democrats’ reconciliation bill dilutes the bipartisan essence of the traditional infrastructure bill. The moderates wouldn’t be able to sell it at home as its own bipartisan achievement because it would be covered in the media as attached to the Democrats’ larger agenda, thereby reducing its political value.

The leader of the moderate nine, Rep. Josh Gottheimer (pictured) of New Jersey, has also expressed the concern that passing the budget resolution first would give progressives extra leverage over one of his provincial priorities: raising the cap on the state and local tax deduction, known as SALT. He told NorthJersey.com that infrastructure projects in the bipartisan bill that hasn’t passed yet could be used as bargaining chips: “They are going to use it as a leverage point against us. ‘You really want that Gateway tunnel? OK, then you are going to have to take less on SALT.’”

So the progressive strategy hasn’t checkmated the moderates. Instead, nine moderates grabbed their own legislative hostage, writing a letter to Pelosi declaring, “We will not consider voting for a budget resolution until the bipartisan Infrastructure Investment and Jobs Act passes the House and is signed into law.”

The House progressives claim to have more people willing to hold out on the bipartisan infrastructure bill than nine. But that doesn’t necessarily mean the progressives hold more leverage.

For one thing, the progressives have been squirrely about exactly how many people hold that position. The leaders of the Congressional Progressive Caucus said in their own letter, sent before the moderate threat was issued, that they surveyed their 96 members and found a “majority of our respondents” would not vote for the bipartisan bill “until the Senate adopted a robust reconciliation package.” But they didn’t tell us how many of the 96 responded to the survey, so we can’t assume the number is more than 48. Moreover, unlike the nine moderates, all those taking the progressive hard-line position haven’t put their names to paper. (I’m not a master head-counter, but so far I’ve counted 11 House progressives who have taken that position publicly.)

But the bipartisan infrastructure bill is … bipartisan. More than four Democrats will be needed to block it on a floor vote. Exactly how many are willing to do so is unknown. Also, anonymous Republican sources told The Hill that “up to 40” in their party would vote for the bill if it came to floor on its own. As with the progressives, most of these Republicans have not put their names on record, so we don’t know if that estimate will hold. Bottom line, the progressives don’t know how many of them they need to exert the necessary leverage.

What the progressives have on their side, at least for the time being, is Pelosi’s cooperation. Pelosi has said the Senate must pass reconciliation first, and she controls what bills reach the House floor. So long as Pelosi maintains that view, it doesn’t matter how many the progressives have in their camp.

However, Pelosi is a master head-counter. If she determines that the moderates can get 217 for the bipartisan infrastructure bill, but progressives can’t do the same for the budget resolution, she may be inclined to take the lone available path to 217 over letting both bills die.

Pelosi has publicly, if indirectly, lashed out at the nine moderates, reportedly saying in a House leadership conference call, “This is no time for amateur hour” and “For the first time, America’s children have leverage. I will not surrender that leverage.” Also, Pelosi ally Sean Patrick Maloney, who heads the campaign arm of the House Democrats (and is considered to be a moderate), recently called some of the moderate holdouts to warn that control of the House is at risk if Biden’s agenda is squelched. Some of the moderates told Politico they considered the call a threat to cut them off from campaign contributions. (An anonymous representative from the campaign arm issued a denial to Politico.)

Is this sufficient pressure to make the moderates cave? It’s impossible to predict, but on its face, the pressure applied so far looks to be fairly gentle. While it is possible that Pelosi would not intervene to help a wayward House Democrat survive a credible primary challenge, only one of the nine moderate holdouts at the moment has drawn a progressive opponent backed by the insurgent Justice Democrats. And it is not conceivable Pelosi would cut off funding to a vulnerable swing district Democrat for the general election, because that would put the entire Democratic majority at risk. As a simple matter of power dynamics, the moderates have far more to gain by following through than folding.

And underneath Pelosi’s tough talk, she is the one who has quietly made overtures. She put the bipartisan infrastructure bill along with the budget resolution in the House rule. And on Saturday night she said in a letter to colleagues that her plan is for both bills to clear the House by Oct. 1, only six weeks away, which is an acknowledgement that the traditional infrastructure bill needs to become law by then or else, under current law, existing surface transportation funding will expire. She didn’t delink the two bills with either move, but she is giving herself the power to delink, and pivot to the bipartisan bill and bring it to the floor. And she is providing an eventual reason to do so: to avoid interruption of transportation funds.

Notably, White House public statements have not taken a side between the House factions. On Saturday, after a phone call between Biden and Pelosi, the White House stated Biden’s “support for Speaker Pelosi’s work to advance the rule that would provide consideration of the Bipartisan Infrastructure Bill and the Build Back Better Agenda[.]” Again, the rule itself doesn’t take a side, and actually brings the nine moderates one procedural step closer to its goal. So this support for Speaker Pelosi’s work is really a neutral statement.

Having said that, the nine moderates have not settled among themselves whether or not to support the rule. Rep. Josh Gottheimer told Punchbowl News last week, “We’re not necessarily opposed to having—voting—on that rule. … The bottom line is, it doesn’t change our position, [which] is let’s just vote on this infrastructure package and get that win done for our country and then we can move immediately, once it’s in law … on reconciliation.” But on Friday CQ Roll Call reported that “at least two of the nine, [Reps. Filemon] Vela and [Jared] Golden, told CQ Roll Call they are planning to vote against the rule. Others said they’re considering it.”

In a Twitter exchange I had with the CQ Roll Call reporter, Lindsey McPherson, she told me that “some think [supporting the rule] would just solidify [Pelosi’s] view that they’re moveable.” Still, since the rule does not prevent the nine from locking arms and opposing a subsequent vote on the budget resolution, we should not look at the rule vote as the make-or-break vote.

Could a compromise be struck? Might Pelosi be able to break the moderate nine with promises to advance individual, provincial projects and initiatives? In theory, yes, but Politico’s Heather Caygle reported on Twitter Saturday night that “Mods claim they haven’t heard from Pelosi and they’re irritated by that. Both sides continuing to communicate through letters and statements.” Creative compromises and concessions can’t be found without negotiations, and at minimum, they haven’t happened yet.

As it stands, the moderate nine have more to gain by sticking than folding. If they could prove that 217 is not possible for a budget resolution first, but is possible for the bipartisan infrastructure bill, that would leave Pelosi with the choice of either giving the moderate nine what they want, or—far less likely—allowing the entirety of Biden’s spending plans to die. Whether the nine have the moxie to stick can’t be known at the moment. But they have the cards.

Bill Scher is a contributing editor to Politico Magazine, co-host of the Bloggingheads.tv show “The DMZ,” and host of the podcast “New Books in Politics.” He can be reached at contact@liberaloasis.com or follow him on Twitter @BillScher.