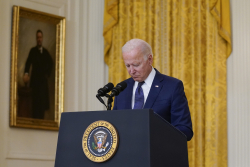 When Joe Biden ordered the retreat from Afghanistan, the media seized on the apt comparison with the fall of Saigon at the end of the Vietnam War. But let’s not give the talking heads too much credit. It was backwards-looking Biden himself who provided reporters with their first clue that something might be up. On July 8, the president had said he saw no parallels between the Afghanistan “withdrawal” and “what happened in Vietnam”:

“The Taliban is not the South — the North Vietnamese army. They’re not — they’re not remotely comparable in terms of capability. There’s going to be no circumstance where you see people being lifted off the roof of a embassy in the — of the United States from Afghanistan. It is not at all comparable.”

Even for a sympathetic media, that rambling assessment was too much to ignore. By the time the Taliban entered Kabul, it was obvious that the U.S. “withdrawal” was a surrender — a retreat at best — and that the commander-in-chief had gravely miscalculated. Video showed would-be Afghan refugees chasing after cargo planes and even, tragically, falling to their deaths from their precarious perch on the outside of those planes. The parallel with the panic at the U.S. Embassy in Saigon in 1975 was plain to see.

In statement after statement, it became compellingly clear that Biden was out of touch with reality. At that same July 8 press conference, he declared, “I trust the capacity of the Afghan military, who is better trained, better equipped, and more re- — more competent in terms of conducting war” than the Taliban. Yes, that Afghan military — the one that barely fired a shot in defense of the nation and turned over billions of dollars of deadly war machinery to the new terrorist state.

Once again, Biden has lived up to his reputation for being “wrong on nearly every foreign policy and national security issue over the last four decades,” as described by former Obama Defense Secretary Robert Gates. So if you want to criticize the president for being disastrously wrong, I suppose that is justified. But he is not the only one at fault. We can appropriately spread the blame among the CIA, the State Department, the Joint Chiefs of Staff, the secretary of defense and the national security adviser, who presumably were all sharing bad intel and bad advice with Biden.

But even more guilty, in my opinion, are the potted plants who make up most of the White House press corps. By the time of Thursday’s suicide bombing that killed 13 U.S. service members, it was obvious even to Democrat apologists on CNN and MSNBC that something was terribly wrong. But where were they for the month preceding that? Think of that long wait between July 8 and the day in early August when the Taliban captured their first state capital. The media had every opportunity to expose the disaster about to happen and to hold the president responsible for his feckless leadership. But what did we get instead? Silence.

Which brings me to yet another American retreat, a less consequential one, and one that didn’t put civilian American lives at risk, but which the anti-Trump establishment media drummed up into a major disaster for the previous administration, only to be proven wrong on almost every count.

I am talking about President Trump’s ordered withdrawal of American forces in 2019 from northern Syria to be replaced by Turkish troops. The media outrage over Trump’s decision to protect Americans from a Turkish occupation force was nearly universal. But let’s look back and see what really happened. First of all, Trump had actually ordered the withdrawal of 2,000 U.S. troops from Syria in December 2018, but it never happened. Why?

To put it bluntly, Trump’s unilateral decision as commander-in-chief was undermined by his generals, his fellow Republicans, and of course the press. We would never have known about the dissension within the administration and within the military were it not for reporters doing their jobs — finding out the truth and writing about it. Whether the generals were right or not, it was important for the president to hear their voices, and take them into account. Likewise, it was important for the president to listen to the people.

And, lo and behold, because the public was told what a catastrophe the withdrawal would be, Trump backed down — or more accurately, he repositioned himself and adjusted his timeline so that the disaster would not happen. He did not want a bloodbath to ensue on his watch. He did not want ISIS to be able to resurrect itself. He did not want to create a vacuum that would allow Turkey to strengthen its position in the region.

Trump demonstrated one of the key traits of leadership — ability to adapt to circumstances and to learn from one’s mistakes. Mind you, Trump never gave up on his wish to end “forever wars,” both in Syria and Afghanistan, but he took the sounding board of the media criticism to heart and revised both his timeline and his means of withdrawal.

Instead of pulling out all the troops quickly, as he had signaled in December 2018, Trump announced in April 2019 that 400 troops would remain, including 200 in northeastern Syria to protect against a Turkish infiltration of the region. He did so at the behest of his generals, but he insisted, “I’m not reversing course” on his plan to end American military involvement in Syria. Then, on Oct. 6, 2019, Trump announced that he was pulling the remaining troops out of northern Syria and would allow Turkey to assume control of the region.

Again, the media was horrified and warned loudly of a bloodbath that would ensue. So too did the usual suspects on Capitol Hill — the neocons and the “forever warriors” like Sen. Lindsey Graham. Graham warned on Twitter that the “most probable outcome of this impulsive decision is to ensure Iran’s domination of Syria. The U.S. now has no leverage and Syria will eventually become a nightmare for Israel.” And also, “I feel very bad for the Americans and allies who have sacrificed to destroy the ISIS Caliphate because this decision virtually reassures the reemergence of ISIS. So sad. So dangerous.”

All of which was trumpeted in the media, but none of which turned out to be true. Yes, Turkey did invade as expected, but when it appeared that our Kurdish allies would be overrun, Trump issued a warning to Turkey’s president and somehow the threat of World War III vanished almost overnight.

Yes, there were downsides to the withdrawal of 200 American troops, but they did not include the death of any Americans. The virulently anti-Trump Atlantic magazine summed up the common wisdom this way:

“The strategic costs [of the withdrawal] were these: a Turkish assault on the United States’ Kurdish partners in the counter-ISIS fight; an unknown number of ISIS prisoners — perhaps 100, Esper told CNN — escaped from prison in the chaos before officials claimed that they’d been recaptured; a reordered map of northern Syria taking shape, with Russia and Turkey as key power brokers filling the vacuum; and a Kurdish partnership with the regime of Bashar al-Assad, who has used chemical weapons and indiscriminate bombings of civilians in a bid to keep power over the course of an eight-year civil war.”

Now compare that to the devastating failure of Joe Biden’s strategy for withdrawing from Afghanistan: The biggest one-day death toll of American service members in Afghanistan since 2011. The release of 5,000 terrorists from Afghan prisons. The creation of a terror haven now armed with top-of-the-line U.S. military hardware including Blackhawk helicopters, Humvees, artillery, guns and spy planes. Plus, the opportunity for China to change the balance of power in both the Far East and Middle East by coming to the aid of the new Islamic caliphate.

How is it that the media’s brilliant military and intelligence analysts were unable to see this one coming? Of course, they could, but Biden was “their guy,” and there was no chance they were going to push Biden for answers and accountability the way they did with Trump.

The same goes for our holier-than-thou politicians. Listen, for instance, to Sen. Jack Reed of Rhode Island as he castigated Trump during the Syrian withdrawal, and ask yourself if there is any chance the Democratic lawmaker would say the same thing to Biden:

“The weakness and incompetence that this president has shown when it comes to national security is stunning,” Reed said, claiming that “instead of telling Erdogan to stand down, President Trump is in full retreat. It’s shameful.”

Except that Trump did force Erdogan to stand down. What is shameful is that Joe Biden surrendered to the Taliban, and with the complicity of both the foreign-policy establishment and the national media, managed to not just outdo the fall of Saigon, but to create the worst military disaster for a major world power since Dunkirk. Biden’s condemnation in 2019 of Trump’s policy in Syria has boomeranged, and now reads like an apt description of his own disastrous foreign policy:

The words may not be comfortable when said about Joe Biden either, but they sure do fit. And that means the only question left to be answered about this president is when, not if, he will be removed from office for dereliction of duty.