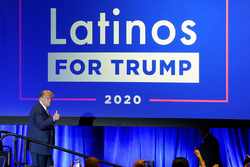 Yesterday I wrote about the realization among some Democrats that the party’s once-hoped-for glorious future based on the support of millions of Hispanic voters might not actually happen. Democratic political scientist Ruy Teixeira, author of the influential book The Emerging Democratic Majority , which predicted just such a future, is now warning Democrats that the party is losing support among Hispanic Americans.