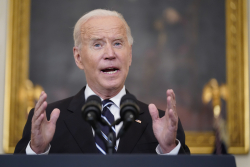 The president has exhausted his patience.

He had tried all the incentives and emotional exhortations and even red-white-and-blue appeals to the patriotism that beats in American hearts. Yet, at least in his estimation, not enough people listened: One-fourth of those eligible still have not rolled up their sleeves, bared their arms, and voluntarily taken their COVID shots.

“What more is there to wait for? What more do you need to see?” an exasperated Joe Biden asked the unvaccinated on Thursday. “We’ve made vaccinations free, safe, and convenient. The vaccine has FDA approval. Over 200 million Americans have gotten at least one shot.”

But Biden won’t wait for an answer to his questions. He and his administration are done with the coaxing. Now, the president has picked up the stick by announcing new vaccine mandates.

Employers with more than 100 workers will be required to ensure their workforce is fully vaccinated or else provide weekly testing for the virus under penalty of stiff fines. Any health care provider that receives federal Medicare or Medicaid dollars must do the same. Anyone boarding a flight must wear a mask or incur a doubled fine, courtesy of the TSA.

How did it come to this? Biden explained not only the need for the sweeping mandates but also said exactly who is to blame. “This is a pandemic of the unvaccinated,” he said, “and it’s caused by the fact that despite America having an unprecedented and successful vaccination program, despite the fact that for almost five months free vaccines have been available in 80,000 different locations, we still have nearly 80 million Americans who have failed to get the shot.”

He scolded the unvaccinated: “Our patience is wearing thin and your refusal has cost all of us.” He dared Republican governors to try and stop him: “If these governors won’t help us beat the pandemic, I’ll use my power as president to get them out of the way.”

And he changed a course he set long ago.

While president-elect, Biden was asked about mandatory vaccinations just weeks after the first successful vaccine trials were announced. “No, I don’t think it should be mandatory. I wouldn’t demand it be mandatory,” he said in December, adding, “But I would do everything in my power — just like I don’t think masks have to be made mandatory nationwide — I will do everything in my power as president of the United States to encourage people to do the right thing.”

That voluntary route had seemed to work. The president told a crowd gathered at the White House to watch Fourth of July fireworks that “we are closer than ever to declaring our independence from a deadly virus.” The crowd wasn’t masked. Neither was Biden. He was confident, and he was conciliatory. “Please, if you haven’t gotten vaccinated, do it,” he pleaded. “Do it now, for yourself, for your loved ones, for your community and for your country.”

Even when the delta variant of the coronavirus started burning across the country, the White House stuck to that message and that tone. When asked if the president should start blaming the unvaccinated, as Republican Gov. Kay Ivey had done in Alabama at the end of July, press secretary Jen Psaki was definitive. “Well, I don’t think our role is to place blame, but what we can do is provide accurate information to people.”

Should the federal government step in and issue vaccine mandates, she was asked. “That’s not the role of the federal government,” Psaki replied. “That is the role that institutions, private sector entities, and others may take. That certainly is appropriate.” Lest there be any confusion, Centers for Disease Control and Prevention Director Rochelle Walensky insisted on July 30 that “there will be no federal mandate.”

Since then, the president has overcome his mandate allergy. “We can and we will turn the tide on COVID-19,” he said at the White House on Thursday in announcing his directives. “We have the tools, and now we just have to finish the job with truth, with science, with confidence, and together as one nation.”

Those words caught Arkansas Gov. Asa Hutchinson by surprise. A rare Republican ally, he was held up recently as an “effective partner” by the White House for his willingness to allow teachers to require masks in public schools. By the time Biden finished his speech, though, Hutchinson had soured. He told RealClearPolitics that the administration’s embrace of mandates “is frustrating in the sense that it is a reversal of policy. It is a change, and an impulsive reaction by the president to the current surge.”

Hutchinson, who chairs the National Governors Association, added that he now worries the mandates may harden the resolve of the unvaccinated because “the more the government pushes, there’s a temptation for people to resist.”

Montana Gov. Greg Gianforte was similarly frustrated, and he dismissed the employer mandate as “first unlawful, and second un-American.” He told RCP that in his state “we are already having enough trouble getting people back to work, and here is one more thing that makes it harder.”

Gianforte has signed into law a bill that makes it illegal for private employers to require vaccines as a condition of employment. “This edict from the Biden administration is unlawful in Montana,” he said, promising to fight the mandate and all but ensuring a fight in the courts.

The president did not address such looming legal battles, and he did not answer a reporter’s questions about the constitutionality of the order. He turned and walked away from the lectern Thursday, unmasked.

A former Supreme Court litigator, Sen. Mike Lee has already reached his verdict. He told RCP that by “coercing private citizens to undergo a medical procedure,” the president “has shown a wanton disregard for the U.S. Constitution.” It isn’t that Lee objects to the vaccine. He took it, and he explained at length earlier this year why he did. The Utah Republican, like many of his conservative colleagues, objects to making the shot mandatory. He didn’t hold back in his criticism of the president and his new policy. “As a would-be autocrat, Biden endangers the very fibers of this great nation,” Lee said. “Freedom and agency are the hallmarks of the American experiment.”