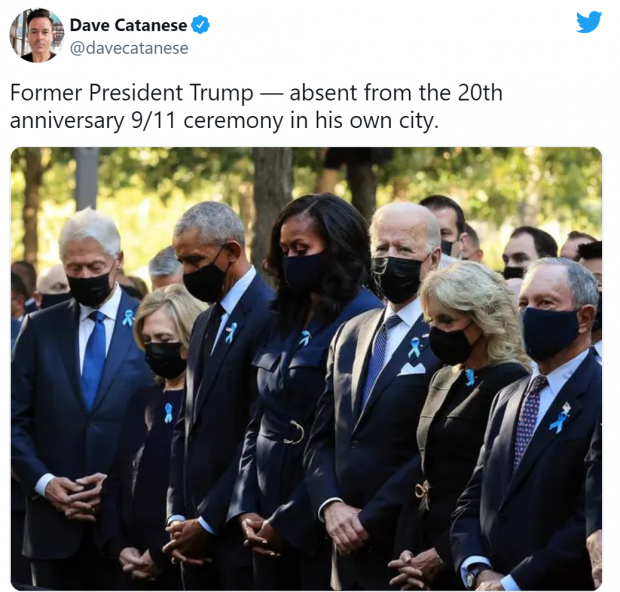 McClatchy Washington correspondent Dave Catanese took a shot at former President Trump for not honoring the 20th anniversary of 9/11, although Biden is looking around during what is obviously a moment of silence.

But, just like most mainstream media journalists, he was quickly outmatched by the former president who visited heroes on 9/11 “in his own city.” Oh, and David, Trump calls West Palm Beach home these days.

Biden, not to be shown up, decided to remove his mask during the 9/11 ceremony and yell at someone at the event.

The expressions on the people’s faces around him are priceless. Dr. Jill, Ph.D. looks mortified, Obama is expressing clear disapproval and Clinton is just pretending like it’s not really happening.

There are zero glowing photos of Biden with first responders, heroes, survivors, or much of anyone that matters. Maybe because many of those folks actually asked him not to come to these events. There was no chance Biden would have received the same reception as Trump, especially after giving the Taliban their own country – complete with military equipment and bases – just before the 20th anniversary of the tragedy they helped facilitate.

Maybe the media should focus more on the current president, who is an actual embarrassment, instead of the former one whom they tried hard, and failed, to make look like one.