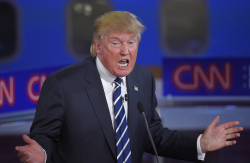 Six years ago today, a large field of Republican presidential contenders met in Southern California for a debate. It was really broken into two debates, owing to the plethora of candidates. The undercard, dubbed the “Happy Hour” debate, featured four men with strong political credentials: Rick Santorum, Bobby Jindal, George Pataki and Lindsey Graham. The main event had some experienced heavyweights, too, as well as some political novices who’d achieved fame in other professions.

Ronald Reagan was there, too, at least in spirit. Not only did the Gipper still cast a large shadow over the Republican Party in 2015, but the event was held at the Ronald Reagan Presidential Library in Simi Valley, Calif.

That was fitting. On this date in history, the Mayflower set sail from Plymouth, England. The ship and its 102 passengers were pointed toward Virginia, where they’d been authorized by the crown to start a colony. Fate had other ideas. Beset by rough seas and hindered by dubious navigational decisions, the Mayflower landed on Nov. 21, 1620 — in Massachusetts. Ten years later, another band of migrants sailed across the Atlantic for New England. Aboard the Arabella, one of the ships in the small fleet, was Puritan lawyer and religious lay leader John Winthrop. During the passage, he penned a sermon for his flock. Its words and imagery would be cited for more than three and a half centuries. They are quoted still. “We must consider that we shall be a city set on a hill,” Winthrop proclaimed. “The eyes of all people are upon us.”

Hardly anyone knew it in 2015, but six years ago, a new ethos was taking hold in the Party of Reagan.

I’ve written often about John Winthrop’s “city set on a hill,” a sermon that borrowed imagery from the New Testament and has broad ecumenical appeal — Roman Catholic politicians use it as often as Protestants — as well as secular meaning.

John F. Kennedy liked to quote Winthrop. Reagan did it so often (with occasional embellishment) that many Americans think the words were his. One elaboration was adding the word “shining” to the depiction. I think Winthrop would have approved. He was describing an America he hadn’t yet laid eyes on, which underscores the point that America is an idea as much a place. In his farewell address as president, Ronald Wilson Reagan expounded on this idea.

“The past few days when I’ve been at that window upstairs, I’ve thought a bit of the ‘shining city upon a hill.’ The phrase comes from John Winthrop,” Reagan said, “who journeyed here on what today we’d call a little wooden boat … looking for a home that would be free.”

“I’ve spoken of the shining city all my political life, but I don’t know if I ever quite communicated what I saw when I said it,” Reagan continued. “But in my mind, it was a tall, proud city built on rocks stronger than oceans, wind-swept, God-blessed, and teeming with people of all kinds living in harmony and peace; a city with free ports that hummed with commerce and creativity. And if there had to be city walls, the walls had doors and the doors were open to anyone with the will and the heart to get here. That’s how I saw it, and see it still.”

That was in January 1989. Twenty-six years later, it would turn out that the Republican base was in a different place. Donald Trump perceived as much, and capitalized on it. The day before the Sept. 16, 2015, GOP debate, Trump whipped up the crowd aboard a retired battleship that would have blown John Winthrop’s mind — the 45,000-ton USS Iowa.

In his 15-minute speech, Trump said that America now treats illegal immigrants “far better” than military veterans. In his telling, immigrants weren’t freedom lovers “with the will and the heart to get here.” They were criminals and grifters.

Carl M. Cannon is the Washington bureau chief for RealClearPolitics. Reach him on Twitter @CarlCannon.