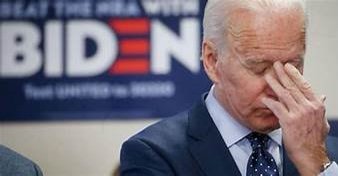 There is an old saying for wayward travelers. “We don’t know where we are going, but we are halfway there.” I am not sure this would apply to the Biden White House as it appears that someone calls the play and the entire staff follows in lockstep.

The problem is that there have been so many bad decisions, someone on the team had to have raised their hand and say, “Hold on a bit here. I think this plan needs to be tweaked.” Should you listen to President Biden, every policy decision has 100% support of every administration component. Is Biden lying, or is our Executive Branch staffed by a group of sheeple? At this point, I do not care which scenario is real. The ship needs to be righted. I do not see this team making the required correction.

This game plan is going to be a unified effort by Biden and his team. Everyone will have the same talking points. Everyone will publicly support every decision, and no one person will ever be held accountable for a decision. They will continue to march Joe out to address the media, but he will also continue not to answer questions. His moments of rambling and incoherent sentences will continue, but the American media will never call him for these moments of straying from reality. If you tune into SKYMAX, you will see how appalled the Aussies and Brits are that an aged Joe Biden is the leader of the free world. They do not understand how the American people allowed this to happen, but half of those same people do not acknowledge a problem with Biden.

The Biden Presidency exposes a conundrum that the country is trying to balance. Liberals may know that Biden is not capable of carrying out the duties of the office. But they also believe that he was the right choice for the country in 2020. Belief is an intense state of mind. Belief can prevent a person from seeing reality. That is where we are at this time. People deny what their eyes see, and ears hear in the belief that Joe Biden was the right person to displace Trump. Their beliefs may be more fantasy than wishful thinking.

When the Afghanistan mission went terrible, Biden told all that he had the full support of his team and our world allies. That turned out to be a stretch of the truth. Advisors have reported that they advised against the President’s plan. England, France, and Germany were caught off guard by Biden’s removal of our military and the closing of our airbase. They found themselves in the same predicament we were in trying to get our remaining citizens out of Afghanistan. That does not sound like we were on the same page.

When the Pentagon admitted last Friday that our Drone strike of August 29th did not kill an ISIS-K head but an innocent Afghan and nine others, including seven children, we offered apologies and money for pain and suffering. Nobody is accepting responsibility or divulging where the bad intelligence came from that resulted in the fatal mistake.

It was announced last week that the U.S. would be taking in 200,000 refugees from Afghanistan. The President is working to secure fast-track citizenship for these people, allow them access to any government benefits they qualify for, and spreading them throughout the country. It has been said that the largest numbers of these new citizens were placed into Red or Purple states. The motive is to influence the voter demographics in these states and turn them into solid Blue. If verified, this, along with the placement of illegal aliens from Mexico, could be the biggest election fraud ever.

No individual is taking claim for any of these actions. They all fall under the Biden Umbrella of bad policy. At the rate these bad decisions are made, Biden best get a giant umbrella.