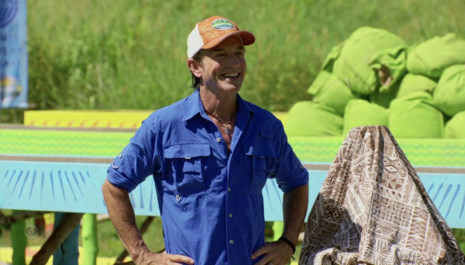 The COVID-delayed 41st season of CBS’s Survivor came with many new changes, but the dumbest had to be one woke man’s insistence that the iconic reality series ban the word “guys.”

At the beginning of Wednesday’s season premiere, titled “A New Era,” host Jeff Probst asked the contestants what they thought of his trademark phrase to call people in for a challenge, “Come on in, guys!” Saying he wanted “to be part of the moment,” he wondered, “Is a word like ‘guys’ OK or is it time to retire that word?”

“I personally think ‘guys’ is OK,” said Evvie. “‘Come in, guys’ is like such a signature expression, and, you know, I as a woman, as a queer woman, do not feel excluded by ‘guys.’”

Genie, a lesbian, verbally agreed, as well as another female contestant and everyone seemed to nod their approval.

Woke madness averted, right? Wrong! In the next hour, before the first immunity challenge, Ricard brought the issue up again and said he regretted not speaking up to voice his disapproval of the word “guys.”

Ricard: So when we saw you on day one, you asked us a question, you asked us how we felt about “Come on in, guys” and the reality is, there was so much going on, there’s so much commotion, cameras, my hair is messed up, I’m half crying, I don’t have the capacity to do what I’m really supposed to do, which I regret. I don’t agree that we should use word “guys”. I fully agree that we should change it whether it just be dropping the guys, changing it to something else, I just don’t really agree with it. The reality is, Survivor has changed over the last 21 years and those changes have allowed all of us, all of these brown people, black people, Asian people, so many queer people to be here simultaneously.

Probst: Yeah, it’s a great point and I gotta say, I love that you thought about it more. I love that you had the courage inside a $1,000,000 game in which standing up anytime is risky to bring it up again because I’m with you. I want to change it. I’m glad that was the last time I will ever say it. And realizing in this moment somebody right now is on social media saying, “Oh, he caved.” It’s @Jeff Probst at Twitter, I’ll probably never read it anyway. Alright, I love that. We just made a change. From now on it is “come on in.”

So, two cis men decided the word “guys” is wrong, over the opinions of the women. Nice.

If the dictionary can change the meaning of the word “literally” to how it is often used colloquially instead of what it literally means, I think it’s ok to continue using the word “guys” informally to mean a group of any gender combination. But what do I know, I’m just another woman.

But the wokeness didn’t stop there. We were also treated to an LGBTQ+ segment about how “incredible” it is that being gay and gay marriage was “stigmatized” along with Ricard talking about his husband, a “transgender pregnant man.”

Shantel: So, how long have you and your wife been married, Genie?

Genie: I’ve been married for 20 years.

Shantel: Dang. That’s so beautiful to see and, like …

Genie: Yeah, I know, right? And it’s just so incredible that, like – it was kind of stigmatized, right, like, to be gay? And so I think that’s really important. I was about 25, and my now-wife proposed to me. I have a very traditional family, so I knew the first thing I gotta do is tell my mom, you know. I thought she was gonna be really upset with me. She gives me a diamond and she says, “I want you to give it to Lindsey.” And I was so touched by that because just from that gesture my mom was telling me she accepted me, she loved me for who I was. And, you know, she never said those words to me but I knew it all right at that exact moment.

Sara: How long have you been married?

Ricard: What was strange about it was, right before we met, I was in the process of fostering to adopt ‘cause I wanted to be a single dad. I never ever ever wanted to get married. At the moment I saw him he was catching a football. He had muscles and it was just awesome. And so we got married 37 days later.

Ricard: And now we have a daughter.

Sara: No way. What’s her name?

Ricard: Being on Survivor, it’s complicated because I’m leaving behind a 22 month old daughter. She doesn’t understand why I’m gone or that I’m coming back. And my husband, who’s working a full time job while taking care of our baby while also being a transgender pregnant man, I’m leaving behind a lot. But if I won this money, I would be able to know that my children’s whole childhood up to adulthood I could take care of them and so I’m here for a really good reason to make a really big impact on my life.

Conservatives Fight Back! Tell Survivor’s advertisers Downy, Etsy, and Xfinity how you feel about them sponsoring this content!