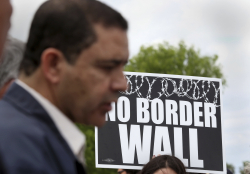 As the immigration crisis worsens in South Texas, President Biden’s inconsistent border policies and messaging are not only damaging his approval ratings nationwide, but they could also cost the Democratic Party once-safe seats in Congress.

The Rio Grande Valley is the epicenter of the crisis, and its residents feel the impact of the surge in border crossings every day. Illegal crossings reached a 21-year high in July with 212,672 encounters reported by the U.S. Border Patrol that month alone. Across southern Texas, car chases have spiked this year, nearly nine-fold in some areas. Ranchers struggle to balance compassion for exhausted immigrants crossing through their property with concerns over personal safety, as well as costs to repair broken fences, trashed land, and stolen equipment. Federal agents also have reported a staggering increase of 4,000 in fentanyl seizures this year in Texas as smugglers exploit stretched border-patrol resources.

Republicans are heavily targeting all three seats after the 2020 election showed a surprising swing in the GOP’s favor along the Texas-Mexico border. Once deep-blue, the three districts voted for Biden by just two to four percentage points, down from the 17-to-22-point margin Hillary Clinton racked up in 2016. Republicans also have redistricting on their side this year with the GOP-controlled Texas legislature poised to redraw several congressional districts in their favor.

Recent polling from the Dallas Morning News and the University of Texas signaled another reason for Democratic angst: Biden’s approval rating is underwater among Latino voters in the Lone Star State. More than 54% of the state’s registered Latino voters said they disapprove of the job Biden is doing overall, while only 35% said they approve.

When it comes to the president’s handling of the immigration crisis at the border, only 29% of the state’s Latino voters indicated their support while 52% said they disapprove (with the rest undecided). The survey was conducted Sept. 7-14, before more than 12,000 Haitian immigrants amassed under the Del Rio International Bridge, creating a new humanitarian crisis with immigration facilities already stretched beyond capacity.

The shift in voting patterns is already having an impact. Earlier this year, Rep. Filemon Vela, who represents Texas’ 34th Congressional District, which includes the city of Brownsville, abruptly announced his retirement. In 2020, he won reelection by nearly 14 percentage points in a seat generally considered safe for Democrats. But national Republicans identified Vela as a target after Biden won the district by just four points, down from the 21.5-point Clinton margin. Five Republicans and four Democrats are now running to replace Vela in what promises to be a sharply contested campaign.

Reps. Henry Cuellar (pictured) and Vicente Gonzalez, the two other Democratic congressmen who represent the Rio Grande Valley, are fighting to keep their seats while taking different approaches to the immigration crisis, even though both strongly campaigned for Biden last year.

Cuellar, who has regularly bucked his party’s leadership over the years, has been an outspoken critic of Biden’s more lenient immigration policies, repeatedly blasting the administration for creating “incentives” for immigrants to make the dangerous journey to the U.S. instead of instituting “uncomfortable” but effective deportation policies.

The 16-year House veteran was the first lawmaker to provide photos of overcrowded detention facilities in Donna, Texas, when the administration was instituting a media blackout earlier this year. He also led calls for Vice President Kamala Harris, Biden’s point person on immigration, to visit the border months before her trip to Central America in June.

Last week, Cuellar waded into the debate over whether Border Patrol agents in Del Rio were using their horse reins as whips against Haitian immigrants, defending their efforts to stop illegal crossings while acknowledging that all immigrants must be treated humanely. Appearing on “CNN Newsroom” Tuesday, Cueller was asked about the photos of border agents chasing migrants on horses – and one that a host said appeared to be using a “rope or a lasso.”

He quickly came to the agents’ defense. “Certainly, we got to make sure we treat all the immigrants with respect and dignity, but I will say this: Border Patrol has had those horse brigades for a while. They’ve had them for a while, number one. Number two, they don’t carry whips, and they do not carry lassos.”

“Should those be used, even if it is a rein?” the CNN host asked.

“If there was a problem, it should be investigated, and I think that’s it,” Cuellar responded. “But we cannot paint the Border Patrol with the same type of paintbrush. What are they supposed to do, just stand there and let everybody come in? They’re supposed to be enforcing the law.”

After the images surfaced, creating an uproar among civil rights leaders, the Homeland Security Department launched an investigation. White House press secretary Jen Psaki announced Wednesday that agents in Del Rio would no longer use horses to try to prevent illegal crossings.

Cuellar has represented South Texas for his entire career, either in the state legislature or in Congress. He won reelection last year by a whopping 20 points but faced a serious challenge during the primary, besting a more liberal candidate by just 3.6 percentage points. The same Democratic challenger, Jessica Cisneros, is running against him again. Republicans suggest that Cuellar is in a lose-lose situation, barely fending off a primary opponent in 2020 and facing a rematch because his immigration views aren’t liberal enough for the Democratic Party even if they represent his district as a whole.

Vicente Gonzalez appears to be even more vulnerable than Cuellar. He won reelection by just 2.9 points last fall after topping his GOP rival in 2018 by 19.6 points. Despite that shift, Gonzalez has mainly defended the administration’s immigration policies, praising Harris’ plan to address the root-causes of immigration as “a holistic approach” to “create conditions for people to want to stay in their native countries.”

“We had a good meeting a few weeks ago with the vice president, and I think she has a very good plan to get to the root causes, which will be the only way to ultimately curb the mass migration,” he told CNN in early June. “If we don’t address the root causes, all we’re doing is putting a Band-Aid on it on our border.”

Over the last two weeks, as the Haitian immigration crisis overwhelmed resources in Del Rio, Gonzalez has steered clear of the controversy, refraining even from tweeting about it. But during a Fox News appearance Thursday, host Neil Cavuto pressed him on Biden’s decision to stop allowing the agents to use horses to control the border.

Gonzalez called it a “very complex and tough situation that we have to investigate.”

“We certainly need to find an orderly way to deal with the crisis,” he added. “I’m not for just releasing people into the country. We need to have a vetting process before they get here.”

A member of the moderate Problem Solvers Caucus, Gonzalez has pushed back against progressives’ calls to abolish the Immigration and Customs Enforcement agency. But he has not joined Cuellar in forcefully criticizing Biden’s approach even as he’s decried the way it has enriched Mexican drug cartels.

Since Biden took office, Gonzalez laments, those cartels are taking advantage of immigrants, charging each of them $6,000 to get to the U.S. border, and raking in more than $1.3 billion in the first few months of this year alone.

The three-term Texas Democrat has so far unsuccessfully tried to persuade the Biden administration to back his idea to establish a processing center for asylum seekers on the Mexico-Guatemala border where immigrants could apply for asylum and fly to the U.S. only if and when they qualify. President Trump secured an agreement with Mexico, Guatemala and Honduras to use their militaries to prevent caravans from continuing into the United States, but when COVID hit, he used an obscure health measure, known as Title 42, to deport immigrants immediately without due process for their asylum requests in the name of public health. Biden is under fire from the left for continuing to use the policy to deport thousands of immigrants while releasing others into the U.S. who have requested asylum.

Those deciding to make the dangerous journey north are only coming from certain impoverished pockets of several Central American countries, Gonzalez has asserted. Because of this, the U.S. needs to make “surgical, thoughtful, intelligent investments that create jobs, create security, that invest in agricultural projects, manufacturing and tourism and ideas that create better jobs for people to want to stay,” he argued.

He didn’t mention that the Obama administration’s attempt to address root-causes by sending billions of taxpayer dollars to Central America – an effort Biden led — had virtually no impact on the continued exodus north.

Gonzalez was far more critical of Trump’s immigration policies. Last year, he called on the administration to suspend its COVID immigration restrictions that were dramatically reducing the number of illegal border crossings but swelling border camp populations in Mexico.

“Imagine these people who have gone through a 2,000-mile trek and are now in a one-acre plot of land — thousands of them. Certainly, it’s an easy place for viruses to spread,” he told The Hill newspaper.

“Mexico could probably do more too, because I went over there, and it was a mess. It’s not like detention centers on this side, as much as we complain about them. They’re living in squalor —  tents on the ground and dirt. Now there’s a place for them to plug in their phones and some port-a-potties, but it’s really bad,” he added.

With the ongoing border crisis continuing to be a drag on Biden’s poll numbers nationwide, Republicans are keeping close track of every statement Cuellar and Gonzalez make on the issue. If their districts keep trending purple next year, Republicans could see a path to retaking the House majority straight through the border territory. No matter the outcome, Democrats will have to invest far more resources than usual to keep these seats in their column next year.