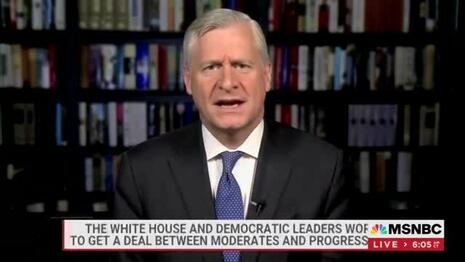 The grand master of over the top sanctimonious hyperbole, Jon Meacham, has struck again and this time he did not disappoint. Meacham got up on his MSNBC soapbox on Morning Joe on Thursday and proclaimed unto all the peoples of the world that the very fate of Western liberalism depended on just two people: Joe Manchin and Kyrsten Sinema. For good measure, Meacham also tossed in the fate of the Constitution as well. According to Meacham all this could fall if Manchin and Sinema fail to rally to save the reconciliation bill.

Yes, never have two people held such power in their hands, at least according to the reliably absurd Meacham as you can see in his typically long-winded response to Joe Scarborough who wondered about the Democrats getting a legislative win by asking, “Do what it takes to win. I don’t see that with the Democrats right now. I am wondering what your take is?”

Oops! When you ask Meacham for a simple take, you must be prepared for an extended blast of hot air such as in this case:

Yeah. You know, I think, and I don’t want to be hyperbolic, but I think it’s a time for pretty straight talk.

“I don’t want to be hyperbolic but…” Which means stand by for long blasts of Meacham brand hyperbole:

Democracy at at stake! And now more from the eternally breathless Jon Meacham:

But if you take one step back, just one, we have an American president who won by 7 million votes, a big margin, historically high margin, higher than Truman, higher than Kennedy, higher than Nixon the first time, you know, a big number. But we have 55% to 60% of the 74 million who believe a lie about the election, in what is a clearly discernible sign post on the way to an authoritarian ethos. So, that’s the setting, right? We have an American president who believes deeply in these institutions and has promised the American people, in so far as any human being can promise, that constitutional democracy, that this republic can deliver for them. Something that the fact that people don’t believe that is not one least one of the factors that gave us this disruptive and possibly fatal to democracy president from 2017 to 2021.

The Adoration (of Joe Biden) as performed by Jon Meacham with the obligatory cameo by You-Know-Who as the Orange Devil:

So, if the Democratic Party cannot deliver this, these bills, I don’t see how the argument can be made that you know what, the system works when we have all oars in the water and go in the same direction. It gives me no pleasure to say this. And I understand if you’re a progressive Democrat, you’re thinking, ‘Wait a minute, this whole other party is just this implacably opposed illiberal, non-reasoning force. Why do we have to give in? Why do we have to compromise on everything?’ Well, in this case, history and experience have put the fate of the Constitution in your hands. And so that’s why. This is not about politics. This is not a fiscal cliff. This might be a constitutional cliff. It’s really tough. You’ve had to cast votes and you’ve had to face voters and I haven’t, and it’s easy for people like me to wax on about ‘we the people,’ I understand that.

We understand that you wax on and on and on with no terminal point seemingly in sight:

But I really believe that if these bills — which are immensely popular, parenthetically, with the American people, right, each element — if you can’t get this done, if the left on one side sinks it or if Senator Manchin and Senator Sinema, who have become two of the most important people in the Western world, you know, since Hobbs and Locke, Western liberalism has not had so much riding on two people, if they can’t come to a deal on this, then President Biden has a tough time making a case for what he believes.

Hobbs and Locke? Hey, you left out Groucho and Harpo, Jon.