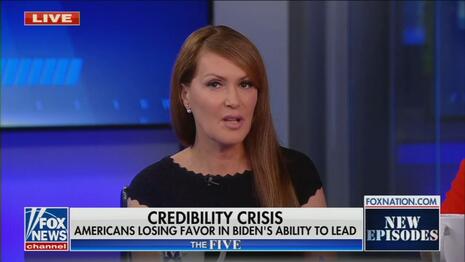 Virginia Kruta at the Daily Caller reported that Fox’s Dagen McDowell let loose on President Biden on Thursday’s edition of The Five.

The quintet brought up Los Angeles Times reporter Chris Megerian asking Biden press secretary Jen Psaki why Biden’s poll ratings were cratering, and how that would affect his credibility in advocating for health guidelines. She claimed “We think it is a reflection of people being sick and tired of COVID and some of that is a reflection of people who are vaccinated being frustrated that there’s still the percentage of the population who are not vaccinated. And that is impacting their daily lives.”

Dan Bongino mocked how Team Biden blames everything that’s not working in America on COVID. Then came Dagen!

You have an entire administration untethered to reality and when theyre caught in an untenable situation, their gut is to just lie, lied about Afghanistan over and over and over again. “Al-Qaeda gone from Afghanistan… oh, Americans can get to the airport in Kabul if they want…our allies are with us.” How much more do the American people have to tolerate?

She concluded: “When a 3-year-old gets caught with his hand in the Cool Whip in the refrigerator and he lies about it, that is cute. But not this old coot, this commander in chaos and all his minions lying over and over to the American people. Stop acting like we’re stupid.”

Brought to you by ZipRecruiter.