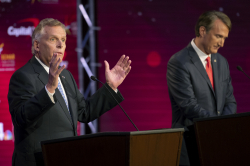 Former President Donald Trump hasn’t been in office since January, and he doesn’t live in Virginia. Nonetheless, Trump has become the biggest issue in the Virginia governor’s race; it’s a sign that Democrats know they could lose not only their hold on Richmond but also Congress during next year’s midterm elections.

Democratic candidate Terry McAuliffe, who served as governor from 2014 to 2018, wants the race to be about Trump. (Virginia does not allow governors to serve two consecutive terms.)

He frequently calls Republican nominee Glenn Youngkin, a first-time candidate who worked his way to the top at the private equity giant The Carlyle Group, a “Trump wannabe.” Likewise, President Joe Biden dismissed Youngkin as “an acolyte for Donald Trump” in July.

Trump endorsed Youngkin but now apparently believes his endorsee has failed to exhibit the expected featly/groveling. Trump recently told radio talk-show host John Fredericks that only candidates who “embrace the MAGA movement” can succeed. Trump added, “I did well in Virginia.”

Actually, Trump lost Virginia by 10 points against Biden, and he lost by 5 points to Hillary Clinton in 2016.

Still, a funny thing happened on the way to McAuliffe’s expected coronation. On Sept. 24, the highly regarded Cook Political Report moved its take on the race from “leans Democrat” to “toss up.”

There could be a sea change after Democrats won all statewide offices on the ballot in 2017.

Since then, Old Dominion Democrats haven’t exactly bathed themselves in glory. In February 2019, Gov. Ralph Northam apologized for his appearance in a yearbook photo of two men — one in a Ku Klux Klan mask, the other in blackface — taken when he attended Eastern Virginia Medical School. Later, Northam denied he was in the photo. An investigation couldn’t prove or disprove either claim.

At first, big-name Democrats, including McAuliffe, called for Northam’s resignation. Northam survived in part because there was no unsullied Democrat to replace him. Shortly after the news of the photo broke, Lt. Gov. Justin Fairfax was accused of sexual assault and state Attorney General Mark Herring was forced to admit he appeared in blackface at a college party.

McAuliffe took back his call for Northam to resign — which pretty much confirmed the public’s suspicion that Democrats hold a double standard on race and gender issues.

(For the record, I don’t think an elected official should resign because of stupid decades-old college behavior or unconfirmed accusations. But Democrats do — or did. Richmond’s cascading scandals made party leaders look like total frauds.)

Larry Sabato, director of the University of Virginia Center for Politics, told me he thinks the 2019 scandals have “zero impact” on the Nov. 2 vote.

“If anything is pulling down McAuliffe, it is Biden’s sinking ratings, along with the inability of the Democrats in Congress — to this point — to get their act together and reach a reasonable compromise,” Sabato opined. If Congress passes some big bills, that could help McAuliffe.

Youngkin’s ties to Trump could hurt the political novice, Sabato added, with “the large majority of Virginians who voted against Trump last November.” Youngkin’s call for “election integrity” doesn’t help, as it “has only served to tie him more closely to Trump’s Big Lie.”

Youngkin, however, has found a strong issue that can appeal to Virginians on the right, the left and the middle: Administrators and school boards have been tone-deaf to parents’ misgivings about educators’ use of classrooms as pulpits for their progressive politics.

During their second debate, Youngkin schooled McAuliffe on the need for schools to listen to parents’ concerns. He referred to a Fairfax County school board meeting at which some parents demanded that two sexually explicit LGBTQ books be pulled from high school libraries. The board ended up removing “Lawn Boy” and “Gender Queer” pending further review.

Youngkin’s take: “I believe parents should be in charge of their kids’ education.”

McAuliffe’s response: “I don’t think parents should be telling schools what they should teach.”

In a matter of hours, Team Youngkin had turned a clip of McAuliffe’s quote into a campaign ad.

It was a smart move to highlight how, given the chance, Democrats overplay their hand. Respect is a one-way street. Parents can’t tell schools how to teach. Schools can tell parents how to raise their kids. Any Democrat who thinks that is no moderate.