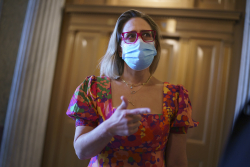 Remember the media cheers for Sen. John McCain when he stopped the effort to repeal Obamacare? McCain was a Republican frustrating a Republican policy goal, which was enough to earn the highest praise in some media circles. “It was a stunning moment,” the New York Times reported, “a flash of the maverick John McCain, unafraid of going his own way despite the pleas of his fellow Republicans.”