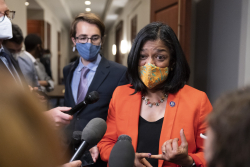 Last week, Speaker Nancy Pelosi said the House would vote on the Senate’s bipartisan infrastructure bill (BIB) by Sept. 30. But progressives have long feared losing leverage on the size and scope of President Biden’s Build Back Better (BBB) package, or losing the bill completely, if moderates had already pocketed their bipartisan achievement. In turn, the chair of the Congressional Progressive Caucus, Rep. Pramila Jayapal, repeatedly said enough of her caucus would vote as a bloc to deny passage of BIB so long as the larger, and not bipartisan, BBB had not yet cleared the Senate. By the end of week, with Biden echoing the progressives’ call for the two bills to proceed concurrently, Pelosi cancelled plans for a vote.

Having successfully executed a power play, Jayapal and her caucus have emerged with greater political capital. For example, I was one of those who regularly questioned whether Jayapal controlled as many votes as she said she did; while Jayapal often said more than half of her 95-member caucus would oppose BIB if it came to a vote before BBB, never did 48 House members go on record with that position. One could not breezily take Jayapal at her word because the Congressional Progressive Caucus has no track record of voting as a bloc to thwart the plans of Democratic Party leadership. Now, the caucus does. And their tactical threats going forward will have to be taken seriously.

The Democrats’ budget resolution, which is nonbinding legislation, initially set the cost of the Build Back Better bill at $3.5 trillion in new spending and new revenue over 10 years, a number many progressives have called a “compromise” well short of what they ideally want. Both Manchin and Sinema voted for the resolution, which was a necessary procedural vote to eventually pass the package through the filibuster-proof budget reconciliation process. But both also said that $3.5 trillion is too much for them to support in any final vote. And in a 50-50 Senate, and with no Republican support forthcoming, only one of their “no” votes would scuttle the bill. So the White House has been scrambling to find a number they will accept. Politico reported Biden has offered $2.1 trillion, while Manchin is pushing $1.5 trillion.

When Biden met with House Democrats on Friday, the big news was that he sided with the progressive view when he said the bipartisan infrastructure bill “ain’t going to happen until we reach an agreement on the next piece of legislation.” But he also leaned on progressives to accept a bill around $2 trillion, according to Roll Call.

Jayapal exited the meeting accepting the totality of Biden’s message, telling reporters, “We’re gonna have to come down on our number.”

Pragmatists should salute Jayapal’s flexibility. She’s not willing to let the perfect become the enemy of the good. But it does make one wonder: What was the point of progressives trying to gain leverage by holding the bipartisan infrastructure bill hostage, if Manchin and Sinema are going to end up largely dictating the terms of the BBB package anyway?

The quest for leverage is not a zero-sum game. The enhancement of House progressive stature doesn’t change Senate math. In a narrowly divided House, with minimal bipartisanship, progressives can block bills they deem insufficiently ambitious. But that power doesn’t give them the ability to force Manchin and Sinema to pass their preferred bills in a narrowly divided Senate.

Of course, negotiations are not finished. If the White House forges an agreement with Manchin and Sinema, progressives may still resist and try to change the terms. Even if progressives accept a lower topline number set by the two moderates, they may still fight over what gets funded by that topline amount.

House moderates in the New Democrat Coalition have argued that new initiatives should be funded for long stretches of time. What’s so moderate about that? Since there will be a cap on the overall cost, longer time frames mean fewer initiatives. Furthermore, as the “New Dems” chair, Rep. Suzan DelBene, explained to me for a Washington Monthly article, “If you assume that you’re going to do something short term just to make it look like it’s going to fit in a particular budget window, for a particular piece of legislation, but you assume it’s going to be renewed later, then you aren’t really being honest about what your long-term budget goals are.”

Progressives, who don’t want their policy ambitions artificially constrained by arbitrary toplines, would prefer seeding a slew of new programs and embedding them in nation’s social fabric, so they become politically difficult to terminate. On Friday, in the midst of signaling acceptance of a lower topline number, Jayapal said, “What we would rather do is get as many [new initiatives] as possible and shorten perhaps the timelines slightly on some of them.”

This debate is already occupying the Biden administration’s time. The Washington Post reported on Saturday that “White House officials are debating whether to drop many cherished priorities from President Biden’s sprawling economic package or keep a fuller range of initiatives in dramatically reduced form.”

Did the progressives’ power play really work? Should they have based their legislative strategy on mistrust of moderates, or should they have proceeded in more trusting fashion, readily accepting BIB on its own merits and then collaborating with moderates on BBB? We’ll have a better idea if progressives won the battle, and the war, after we see the final bill.

Bill Scher is a contributing editor to Politico Magazine, co-host of the Bloggingheads.tv show “The DMZ,” and host of the podcast “New Books in Politics.” He can be reached at contact@liberaloasis.com or follow him on Twitter @BillScher.