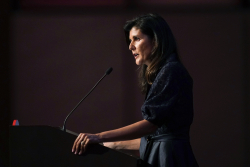 Before her big speech Tuesday night about the future, Nikki Haley discussed the immediate past: She speaks with the 45th president regularly, she still thinks of him as a friend and, she clarified to a reporter from the Wall Street Journal, she does not “want us to go back to the days before Trump.”

And yet the former ambassador to the United Nations, who has already vowed not to stand in Donald Trump’s way if he seeks the Republican nomination a third time, stepped into a different president’s shoes. In prepared remarks obtained by RealClearPolitics, Haley invoked Ronald Reagan, not just out nostalgia, she insisted, but out of necessity.

The setting made that overture appropriate: Haley was speaking at the Ronald Reagan Presidential Library in California as part of its “A Time for Choosing” series spotlighting potential White House aspirants. But so do current events. “History isn’t exactly repeating,” Haley said, borrowing a line that President Biden also favors, “but it is rhyming.”

As she sees it, with growing inflation, runaway federal spending, violent crime spiking in our cities, leftists running American universities, and an evil communist empire expanding, the métier of the late 1970s now matches that of the 2020s. Other Republicans have said similar things. Haley argued explicitly that there’s a new stand-in for Carter-era malaise.

“The most urgent mission of our time is to stop our national self-loathing and to regain our courage and renew our convictions,” the former two-term South Carolina governor said of the collective soul of the country in what was billed as a foreign policy speech. The chaos in Afghanistan, what she called “the fall of Saigon and the Iran hostage crisis rolled into one,” was an obvious hook for Haley. She warned that while the war there is over, “the consequences of this failure are echoing across the world.”

The withdrawal not only left the Taliban in control, it placed the United States in “greater danger today than we were just three months ago.” And worse, according to Haley, while “Biden thinks retreat is a sign of strength,” the pullout has “told the world that America is too weak to stand up for itself.”

Haley surveys a globe where radical Islamic terrorists in Afghanistan and Iran “will push their advantages because Joe Biden has proven he will fold”; a Russia where Vladimir Putin is “pocketing the president’s foolish concession” on the Nord Stream 2 pipeline; and a China where Beijing “sees the biggest opening its ever had” and is placing Taiwan “directly in its crosshairs.”

The current president says this era is defined by “autocracy versus democracy.” The former U.N. ambassador argues that the world is already “wondering if the American era is over.”

“We’re in a clash of civilizations and the bad guys think the good guys lack the will to win. That perception is very dangerous for America and the free world,” Haley said.

“Our enemies have always hoped this day would come. They know from history that when America retreats, freedom falters,” she added.

“But I also saw at the United Nations that when America steps up, our enemies step back. The barbarians of the world fear nothing more than a confident and strong United States with the courage of our convictions,” she concluded.

Such sentiments could be the framework for future stump speeches. Haley certainly sees herself as a possible contender. She spent three days in Iowa earlier this summer getting to know the first-in-the-nation caucus state and stoking presidential speculation. She already recruited Tim Chapman, formerly of the conservative Heritage Foundation, to helm her political-action committee and has courted top Republican donors. A decision about the White House will likely come, Haley told the WSJ, “in the beginning of 2023.”

One thing is already inescapable: She has embraced what Trump told RCP in the Oval Office before the last presidential election: that “we are in a culture war.” But in her remarks Tuesday, she expanded that front. “This problem runs deeper than being ‘woke.’ It’s bigger than critical race theory,” she said before adding that while those totems are toxic, “the greater danger is that anger toward America is now the bedrock belief of the American left.”

To show just how far the left has gone, Haley quoted Barack Obama, specifically his address at the 2004 Democratic National Convention where the then-little known Illinois state senator spoke in reverent tones about there being no black America or white America, just “one people, all of us pledging allegiance to the Stars and Stripes.” Fast-forward to 2021, and she asked, “Can you imagine any prominent Democrat making that statement today? I can’t.”

Republicans must reclaim the vision that Democrats abandoned, Haley told the crowd. And that “unifying message on race and national identity,” the one Obama shared at the DNC, long was close to the GOP’s heart. “It was our message first,” she said. “We must once again take it to the American people.” Here the former diplomat echoed Abraham Lincoln, calling for a second “new birth of freedom.”

Just as the malaise of the Carter administration made way for Reagan’s “morning in America,” Haley argued that the self-blaming ethos of the emergent Biden era could bring forth a new conservative champion in response. All that is needed, she argued, is “a new awakening of patriotism” to stop “the decaying belief that our country is systemically racist” and a rekindling of “faith in our first principles” to accelerate “progress toward justice for all.”

The Haley speech finds Republicans somewhat at loose ends. Though unified in opposition to Biden’s policies, the party has fought its own internal wars over its post-Trump direction. But she cited history as her talisman when she promised that “we will come through this crisis.”

“After all, it was only 16 years from the fall of Saigon to the fall of the Soviet Union. When President Reagan predicted the Soviet collapse, it appeared unimaginable. Nine years later, it happened,” Haley said before vowing that the United States would, in the end, “also leave Chinese communism and the criminal regime in Iran on the ash heap of history.”

Of course, that won’t be easy. Haley said as much, noting that “our challenges are steep.” She insisted, however, that those obstacles can be overcome “so long as we believe in America and fight for America. We have no higher calling as a people.” The possible 2024 candidate, who has embraced both Trump and Reagan, added, “I pledge to answer that call, and inspire our country once again.”

“Most of all, by restoring belief in the goodness of our national cause,” she concluded, “we’ll prepare the country to beat the challenges of the 21st century.”