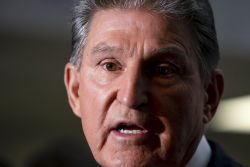 “Biden goes to church and walks through a graveyard in Wilmington as his legislative agenda is dying in Washington.” — Tweeted by a Washington Post reporter

Nineteen words shows what ails the press covering politics at the top rung. Jaded, in a word. The cold-blooded sneer as the president visited family graves shocked even the Twitterverse.

And it was dead wrong. President Joe Biden’s ambitious two-track legislative agenda is alive on Capitol Hill for all of October. The mainstream coverage is colorful but shallow, with daily headlines saying Democrats are “lurching,” “blockaded” and “infighting.”

But few delve into details of the bipartisan infrastructure bill (BIF) and the content of Build Back Better, Biden’s visionary plan for social infrastructure. The BIF bill is for shoring up familiar infrastructure, like roads, bridges, ports, trains and broadband.

After all our floods, fires and droughts, climate crisis measures are also part of the lifesaving legislation.

Democrats in Congress have not settled on the time and money frames — somewhere between $1.5 and $3.5 trillion. Yet you hear that “moderates” and “progressives” in the House are locked in combat, preventing a vote on either bill.

The real gap right now is between the House and the Senate Democrats, two in particular. Joe Manchin of West Virginia and Kyrsten Sinema of Arizona are playing singles instead of joining with the other 48 Democrats to play on their team to deliver a major win.

The culture of the lordly Senate “plantation” gives them tacit permission to hold up a new president of their own party.

The truth is, there are only a handful of moderates in the House, compared to about 90 in the progressive faction. The press is overstating the power of moderates like Josh Gottheimer, D-N.J., who does himself no favors with House Speaker Nancy Pelosi, D-Calif., by scolding for a vote on the bipartisan bill, passed by the Senate.

The progressives are a solid front, much to the amazement of the media.

Pelosi’s hardheaded strategy is to pass both bills at once, not orphaning either. When Biden came to call on House Democrats, he made the same pitch: together, together. The high number would have to come down, he said, to the $2 trillion range.

Biden and Manchin, seasoned pols in their 70s, can sit down and have a “Joe on Joe” talk about trims to Build Back Better.

Sinema, however, baffles all around. The 45-year-old dresses in edgy purple, orange and pink, often displaying her Ironman biceps, lately hanging out with industry lobbyists.

An author of the BIF bill, still she resists speaking to the press or lawmakers about objections to the Biden new deal, Build Back Better.

Sinema’s outre clothes, wigs and shoes suggest that she is more style than substance. Her bespoke clothes telegraph a defiance to authority, to political elders, that you can’t make me be like you. She likes being an outsider among insiders.

An exotic bird, but the Arizona senator is not stupid or lazy.

The House speaker’s battle cry to her 220-member caucus goes like this: “We must save the planet for children, jobs and security. We must come to agreement on the Build Back Better Act and pass the BIF — and we will!”

Pelosi is up to the task, seeing the comprehensive bill as the finale of her lifework. Her heart lies with progressives, but she has to protect moderates in her tight majority.

But Manchin and Sinema are the president’s hard work.

I saw Biden walk in the Capitol carriage entrance and greet the Speaker’s team one by one with warm grace: “Asking permission to come aboard.” A pleasant president, how refreshing.

Back to that tweet. Cynicism was contagious for many who covered former President Donald Trump’s White House and his endless, exhausting tweets from dawn to dark. Trump ran the press corps ragged, distracting them from his dark deeds.

Trump left his jagged writing on many walls in Washington. We are all in recovery.