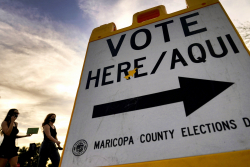 President Trump’s impact on Hispanic voting patterns was counterintuitive: Despite his administration’s unwavering focus on tightening U.S. immigration policy, including building a wall on the southern border, he and fellow Republicans made significant inroads with Latino voters.

Trump won 38% of the Hispanic vote in 2020, a 10-percentage-point increase from 2016 and far better than John McCain and Mitt Romney, the previous two GOP nominees for president. In the most heavily Hispanic area of the country, South Texas, Trump’s gains were eye-popping. Even though Joe Biden won the national popular vote by two percentage points, Trump increased his margin of victory by a whopping 19 to 55 points in 10 heavily Mexican American counties along the border.

Analysts attribute the gains there at least in part to an aversion among many Hispanic voters to the Democrats’ leftward lurch on issues such as defunding the police, ending U.S. reliance on oil and gas — major industries in South Texas — and even progressives’ disparaging the Immigration and Customs Enforcement and U.S. Customs and Border Protection agencies, big employers in the area.

Trump himself, in an interview with RealClearPolitics co-founder Tom Bevan, said of his Latino support: “They see I’m doing the right thing. … I’m tough on the border, and tough on immigration. And they knew better than anybody else that the border was important.”

Trump also bested Biden in Florida by winning over many first- or second-generation Latino immigrants who fled socialist or communist countries such as Cuba, Venezuela and Nicaragua. According to exit polls, 45% of Latino voters in Florida backed Trump, up by 10 percentage points over 2016.

With Trump off the ballot next November, Republicans are hoping to expand those gains in the crucial congressional midterm elections by opening Hispanic outreach centers. The effort is beginning more than a year before voters head to the polls to determine whether Democrats will retain control of both houses of Congress.

As part of Hispanic Heritage Month, which ends Oct. 15, the Republican National Committee opened outreach offices in Milwaukee, Doral, Fla., and McAllen, a city that borders the Rio Grande River. The committee previously opened a center in Laredo, another Texas border town, in late summer and plans to set one up in Las Vegas in the coming weeks.

McAllen is one of the biggest cities in the Rio Grande Valley and is 85% Hispanic. Once a Democratic stronghold, the electorate is now trending purple. A Republican Latino mayor was narrowly elected there this summer in a run-off. McAllen and the surrounding area is represented in Congress by Rep. Vicente Gonzalez, a big GOP target next year. He won election in 2018 by 21 points but came within three points of losing last year.

“Since 2016, we’ve seen Republican support surge among Hispanics as Hispanics continue to reject the Democrats’ socialist agenda,” Republican National Committee Chairwoman Ronna McDaniel said in a statement. “Building upon our successes, the RNC is making long-term commitments and investments in the Hispanic community. … The Republican Party is the party of freedom and opportunity for all Americans, and we will continue to strengthen our investments in Hispanic communities every day.”

The RNC is touting the new outreach centers this week, but Democrats dismiss the efforts, pointing out that they opened several field offices in South Texas months ago and have been “organizing Latino voters and ensuring Republicans can’t run away from their extremist record,” Lucas Acosta, the Democratic National Committee’s coalitions director and senior spokesman, told RCP.

“Under Donald Trump, Republicans gifted corporations and pharmaceutical companies billions of dollars in tax cuts at the expense of the middle class,” he said. “It’s going to take more than a photo op to make Latino voters forget that.”

Overall, Latinos were still decisive in sending Biden to the White House, voting for him over Trump by a margin of at least 2 to 1 in an election that saw record turnout from the community. Nationwide, Latinos cast 16.6 million votes in 2020, up 30.9% over the 2016 presidential contest, according to a post-election report conducted by the University of California at Los Angeles Latino Policy & Politics Initiative.

Hispanic voters also were critical in flipping the battleground state of Arizona to Biden, the first Democratic presidential candidate to win there since Bill Clinton in 1996. They also helped tip the scales in favor of Biden in Wisconsin and Georgia where his margin of victory was less than a single percentage point.

In their own Hispanic voter outreach efforts ahead of next year’s midterms, Democrats are highlighting the big spending packages that have become law since Biden was elected, including the $1.9 stimulus bill, which passed in March without one Republican vote. Acosta said the bill helped create more than 4 million jobs and provided funds for lower-income families to help “lead us out of the pandemic.”

“Democrats will keep fighting for Latino families and will continue to do the grassroots work in the Latino community to ensure voters see how Democrats are delivering for them,” Acosta said.

Still, there are warning signs for Democrats that Biden’s agenda isn’t catching fire among this demographic. A Quinnipiac poll released in mid-September found that only 38% of Hispanic voters approve of Biden’s job performance while 47% disapprove.

Biden’s more lenient immigration policies have hurt his standing among Hispanics in Texas, a key battleground territory for determining who controls the House of Representatives. Recent polling from the Dallas Morning News and the University of Texas found only 29% of the state’s Latino voters support Biden’s handling of the immigration crisis while 52% disapprove.

“[Biden’s] created a humanitarian crisis at our Southern border, and it’s dangerous for communities in Texas,” Danielle Alvarez, a Cuban American and the RNC’s  communications director, told RCP. “The Republican Party believes in legal immigration and supporting law and order, which is important for many Hispanic voters who come from countries where they didn’t have the ability to call 911 like we do.”

The National Republican Senatorial Committee cites its own polling from May as demonstrating that many Hispanics are continuing to reject central pillars of the Democratic agenda heading toward the midterms, including “wasteful spending,” more relaxed border policies, and even the push to ban voter ID requirements, part of voting measures passed in both Texas and Georgia this year that Democrats argue will suppress turnout among minorities.

The survey, which questioned 1,200 Hispanic voters in eight battleground states, found that these voters value free-market capitalism over socialism and worry that opportunities for their children will diminish if Democrats remain in charge at the federal level. Of those questioned, 65% said they oppose the Democrats’ voting rights bill — now stalled in Congress — that would make voter ID illegal, while 72% believe the government should “do what is necessary to control our southern border.”

Republicans in recent years also have increased voter registrations among Hispanics by 181,017 nationwide, making big gains in Texas and Florida since 2016.

In the latter, for instance, since 2016 Republicans have whittled down Democrats’ 327,000 net registration advantage over the GOP to 62,000. In Texas, voters are not required to designate a party when they register, but the GOP believes 720,000 new registrations are Republican or Republican-leaning, and 180,000 of those are Hispanic.

Democrats’ voter registration drives were hampered last year because of the pandemic but they are vowing to make up any lost ground. Last week, the DNC launched a $5 million registration drive, mainly targeting minority voters. That effort is focused on several battleground states, including Arizona, Florida, Texas, Georgia, Pennsylvania and Nevada. State Democratic parties in Texas and elsewhere are also working to replicate voter registration success in Georgia, a longtime Republican stronghold that Biden turned blue last November and where Democrats won two Senate seats, flipping the upper chamber to Democratic control.