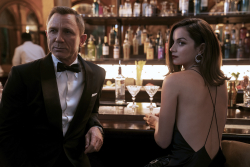 (Spoilers ahead: You have been warned.)

The James Bond franchise’s 25th official installment — “No Time to Die” — is in theaters and raking in hundreds of millions of dollars worldwide. Critics and everyday cinema-goers are signing off on the content. While the film’s finale has split Bond aficionados into two camps, there is plenty in the movie to appease even the most ardent fans of Ian Fleming’s original novels.

So what’s the catch? Alas, it is 2021. This year’s Bond release — the most cinematic celebration of traditional masculinity — would be nothing without the predictable “progressive” scorn it triggers. The Bond villain (played by Rami Malek) is “problematic,” you see? James Bond starring in his own movie is the “problem,” you know?

The character is toxically masculine, don’t you get it? And his fans are too!

The online debate surrounding the Bond character is indicative of our broader political discourse in a COVID-19 world. Gone are the days of nuance, when you can simultaneously enjoy a beloved character while recognizing his unique flaws. In many corners, they are replaced with the reductive “gotcha” game of “pick your side — or else.” Supporting Bond makes you a toxic male, while opposing him affirms your progressive enlightenment. Support Bond’s (consensual) seduction of a female co-star, and you support the regressive patriarchy. Oppose it, and you must oppose the patriarchy that keeps women down.

It’s a ridiculous way of looking at the world, without context or critical thinking. But, unfortunately, it transcends the escapist pleasures of the Bond cinematic universe. Critics of COVID-19 vaccine mandates are regularly derided as “stupid” and “anti-vax,” although you can be “pro-vax” and “anti-mandate” at the same time. According to recent estimates, more than 70% of Americans are at least partially vaccinated against COVID-19, yet barely 50% approve of President Biden’s sweeping vaccine mandate.

People can condemn sexual misconduct on college campuses while calling attention to false allegations that hurt men and women. People can believe in civil rights and the equality of opportunity without falling for “equality of outcome,” now popularized by the equity-focused teachings of critical race theory. People can be “pro-immigrant” (I myself am a Bosnian refugee) while drawing the line at the mass influx of illegal immigrants overwhelming the U.S.-Mexico border.

Can’t we chew gum and walk at the same time? America’s newfound obsession with blindly picking sides is as divisive as it is exhausting. There is no utility in it.

There is utility in nuance. Calling balls and strikes — in politics and in all manners of discourse — is the only honest, productive way to engage with others. It leads to healthy disagreement and, hopefully, the discussion that forms the backbone of free speech. And that is great for American democracy.

Which brings us back to Bond: Like all other scolds, the most vocal 007 critics refuse to recognize the nuance of the British super-spy, proclaiming him “too toxic for the #MeToo era.”

Really? The same Bond who falls in love with Tracy di Vicenzo in 1969’s “On Her Majesty’s Secret Service” — only to see her brutally murdered after their wedding and never remarry as a result? The same Bond who, in 2021, sacrifices himself for his new love interest (played by Lea Seydoux) and their young daughter? While saving the world, no less?

This is not to proclaim Bond a perfect character. He is deeply flawed, and novelist Ian Fleming intentionally made him so. And that’s fine. In fact, it makes a fictional spy infinitely more relatable.

In 1964’s “Goldfinger,” Sean Connery’s version of Bond slaps a masseuse on the bottom for no particular reason. Daniel Craig’s rendition would never stoop to that low, and that’s a good thing. Bond can evolve without losing his essence. Lose that essence, and the character’s global appeal fades away.

Our most beloved characters don’t need to be morally or ideologically “pure.” That was never the point, and it shouldn’t be our expectation today.

Set to return in the near future, Bond still has “no time to die.” But time is up for the 2021 brand of reductive politics.

Luka Ladan serves as president and CEO of Zenica Public Relations in Portland, Maine. He is a Catalyst Policy Fellow at the Independent Institute and a die-hard fan of the James Bond franchise.