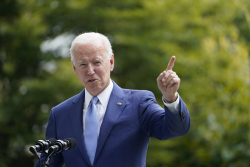 As a candidate, now-President Joe Biden said that if elected, he would bring the country together, heal partisan divisions and get things done. How’s that working out?

Sure, on the campaign trail, Biden seemed so convincing. He was the seasoned hand, a former vice president with 36 years in the Senate who knew the ways of Washington.

“We need to revive the spirit of bipartisanship in the country,” he said in Ohio in October 2020. He said he wanted to “work with one another.” If he occupied the Oval Office, he promised, “there will be no blue states and red states with me.”

Some nine months into his tenure, it’s evident that Biden’s unity pledge ranks with former President Barack Obama’s campaign whopper, “If you like your health care plan, you can keep it,” which won him PolitiFact’s Lie of the Year in 2013.

It’s not just that Biden isn’t producing unity; it’s also that he’s squandering the moment for a bad idea.

GOP senators provided the votes for a $1 trillion infrastructure measure so that it passed the Senate. They stuck their necks out. Then he bailed out in favor of a $3.5 trillion behemoth, dubbed Build Back Better, a darling of his party’s progressive wing, but not the center.

With two years of free community college, universal preschool, and 12 weeks paid family and medical leave, Biden has set himself up to be not just better than vanquished President Donald Trump but a “transformational” president.

Democratic Sens. Joe Manchin of West Virginia and Kyrsten Sinema of Arizona believe that much spending is not good for America’s wallet. In August, the Committee for a Responsible Federal Budget estimated the $3.5 trillion measure would force $2.9 trillion in borrowing over a decade and lift the debt to 115% of GDP by 2031.

But rather than work with them, Team Biden is pressing them to submit. That’s unity Biden-style.

Press Secretary Jen Psaki told reporters Wednesday the president was not pushing for the lesser bill that easily won majorities because “he wants his entire agenda passed.”

Sorry, but he’s not king. He’s not even Donald Trump.

That’s how Biden has worked to divide Washington. But worse, on the vaccine front, he’s dividing America by requiring that employers with more than 100 workers mandate vaccines among their employees.

Biden used to oppose federal vaccine mandates. As recently as July, Biden maintained it was not clear if he had the authority to impose federal mandates. Then, Psaki told reporters: “That’s not the role of the federal government. That is the role that institutions, private-sector entities and others may take.”

She was right then. Some nursing home administrators might choose to mandate vaccines; others know that a mandate could lead needed staff to quit. That’s not good for health care.

It’s easy for vaccinated people (like me) to say everyone should be vaccinated, but if you believe in individual rights, including the right to refuse medical treatment, you can’t force everyone else to be vaccinated by fiat.

Biden’s move to make businesses with more than 100 workers require employees to be vaccinated will have ugly consequences — and widen the red-state blue-state divide he pledged to close.

As a candidate, Biden promised that he would not “blame others” when things go wrong. But his push for mandates is Washington’s way of finger-pointing away from the nation’s destructive supply chain shortages, worker shortages and what under a different president was seen as a national malaise.

As I write this, Biden’s job RealClearPolitics average approval rating is underwater by 7.9%. His low numbers, they’re becoming bipartisan.