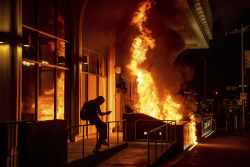 FNC’s ‘Tucker Carlson Tonight’ host describes how the country’s quality of life in on the decline:

TUCKER CARLSON: We’re going to take you back about a year and a few months to the day America changed. You may have noticed it at the time, but this really was the pivot point. It was the height of the BLM riots early last summer, and rioters in Minneapolis had just torched a bunch of different buildings, and standing right in front of them was an MSNBC reporter who was broadcasting live from the scene.

Now, the mob began by torching small businesses all through the city, including a liquor store, which of course, they looted first naturally. Then, as the rioting accelerated, they walked down the street and burned down the Third Precinct police station, the Minneapolis police station. Now, as you saw that happen, you realize, ooh, this is a little different from anything we’ve seen before. We’ve seen riots before, in 1992. Following the Rodney King verdict, rioters in Los Angeles torched a lot of the middle of that city. But they didn’t burn any police stations because you can’t burn a police station because there are police there and they’re armed and they represent the law, they enforce the laws. You can’t burn down a police station because if they let you do that, then you know the whole system is crumbled.

And yet that’s exactly what happened just days into the BLM hysteria last summer. A police station was burning, and the implication of that was very clear. This is why we don’t allow police stations to get burned because the message it sends is this: the police can’t protect you, They can’t even protect themselves. So the police aren’t in charge. Legitimate authority is gone. The mob is now in charge.

So as this is happening, there happens to be, as noted, a reporter standing right there with a microphone and a camera taking those pictures directly into your living room. That reporter, was called Ali Velshi, and he’s famously not super bright, but he was on the scene. Here is how he described what was happening right behind him.

ALI VELSHI: The fire engines can’t get in here. There is no ability to bring anybody in here to solve this problem, so I want to be clear in how I characterize it, this mostly protests. It is not – It is not, generally speaking, unruly.

It’s the greatest tape ever, you’ve probably seen it a hundred times. We watch it every morning, just for edification. It’s mostly a protest, he said. Flames in the background. It’s generally speaking, not unruly. While standing in front of a burning building.

So that tape, as we just said, is very famous and a lot of people look at it and they say, “that reporter is a moron.” Which of course, is true. He couldn’t even describe what he was seeing accurately. What a gaffe. But it wasn’t a gaffe, was not taken out of context, in fact, it was MSNBC’s explicit editorial policy to lie about what you were watching live, to characterize violent riots as peaceful protests.

And it wasn’t just Ali Velshi. That very day, probably the oiliest of all MSNBC anchors, a character called Craig Melvin explained the network’s approach to the story: “This will guide our reporting in MN: While the situation on the ground in Minneapolis is fluid, and there has been violence, it is most accurate at this time to describe what is happening there as protests — not riots.”

Paging Dr. Orwell, not riots, oh they’re not riots. The one thing these things aren’t – the torching the police station, looting liquor stores – they’re not riots. Oh, not at all. But MSNBC is not an outlier in adopting this policy of reality denial. Here’s what CNN’s coverage said at the time”

LEMON: And let’s not forget, if anyone is judging this, I’m not judging this. I’m just wondering what is going on. … Our country was started because – the Boston Tea Party rioting. So don’t get it twisted and think oh, this is something that has never happened before and this is so terrible and where are we and these savages and all of that. This is how this country was started.

Yeah, this is totally normal. We’ve been dealing with this for hundreds of years. Sam Adams himself torched a Wendy’s and looted a liquor store before burning down a police station in downtown Minneapolis. It’s how this country started. We’ve always had riots and looting virtually every day. It’s totally normal.

So your job as a viewer, per CNN, MSNBC, New York Times, The Atlantic, The Washington Post, all the rest of them, was to remain calm. Acknowledge that this is just the way things are. This is the way they have always been and accept it. The country your ancestors built is on fire, but shut up because your ancestors also burned it down.

Now that’s not true. In fact, it’s grotesquely untrue, and you have to be historically illiterate to believe it. Many people are, unfortunately, but it worked because propaganda does. That’s why they do it. So instead of pushing back against this rioting, most Americans kind of went along with it. Well, it doesn’t look quite right to me, but this is how our country started. That’s what Don Lemon said. So I’m going to kind of go along with it. In other words, as your quality of life declines, you are instructed not to notice.

And this trend has continued, The Washington Post just ran this headline, “Don’t rant about short-staffed stores and supply chain woes.” Rather than “living constantly on the verge of throwing a fit … We do ourselves a favor by consciously lowering expectations.”

Got that? So if you don’t like the fact the shelves are bare in your local store, don’t throw a fit. Don’t be an entitled little tool. Lower your expectations, what did you expect in America? Come on. Bread lines, we’ve always had bread lines. It’s sort of charmingly retro, these bread lines. Don’t complain as your life becomes worse and as your country degrades. That’s the message, and not surprisingly, that message is coming directly from the people who are making your life worse and destroying the country. That would, of course, would be the White House. Here’s his grouchy little flack today, almost impossible to believe this person is real and not just some sort of mockup of like a Wesleyan gender study student. Apparently, she is real. And today she was asked about these supply chain problems like our ports are shut down – What do we do? She mocked the reporter’s question. How dare you ask…

So to recap, you can walk into our country at the invitation of our leaders at public expense. You can overstay your visa and in so doing, mock our laws. Then you can get busted for drugs and a sex crime, not deported, allowed to stay. And then you go on – Probably inevitably at this point – to rape a woman on a train in full view of a crowd that does nothing to stop it.

But it’s always been this way. Don’t get uptight, readjust your expectations. You want more of this? We may be getting it. Today, Joe Biden’s nominee to lead the Border Patrol, a guy called Chris Magnus set for his confirmation hearings. Now it turns out that Magnus, if anything, is to the left of Biden, even to the left of Barack Obama on immigration matters.

Just a year ago, when he was the police chief of Tucson, Arizona, Magnus rejected a federal grant that was part of a program called Operation Stone Garden that was supported by the Obama administration. Now, the point of the program was to help border towns fight cartel violence and drug trafficking. That would seem a worthy goal, not really directly related to immigration, directly related to the deaths of hundreds of thousands of Americans.

But Chris Magnus, in his wisdom, rejected that money. His own police department was outraged by this, but Chris Magnus didn’t care because he’s a deeply good person, unlike you. He’s happy to abet the deaths of thousands of Americans by drug ODs. He said that this money and this mission – stopping drug cartels – didn’t align with the work he’s doing. That work, of course, is opening our country’s borders.

So here you have the person who’s about to oversee our country’s border security, who does not believe in borders. Now, if that bothers you in any way, if you think we should be deporting rapists instead of letting them rape women on trains, then the White House has a very clear message for you: Shut up, Karen. Stop complaining. Those arsons are an arsonist or mostly peaceful protesters. That treadmill? You don’t deserve a treadmill. Lower your expectations. Get used to it.