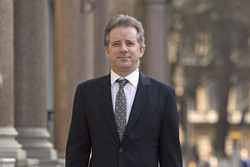 When you think about it, the phony claim that, in 2013, former President Donald Trump cavorted with prostitutes in the Moscow Ritz-Carlton who urinated in front of him on a bed once used by former President Barack Obama and his wife was genius.

After all, who could make this stuff up? The “dossier” in which it first appeared, written by former British intelligence officer Christopher Steele, was unsuccessfully shopped to the press corps during the 2016 presidential campaign. The “perverted sexual acts” allegation, commonly referred to as the “pee tape,” was both specific and salacious — a combination that must have been painful for Beltway journalists to resist.

Yet at the time, they did resist. Reporters wouldn’t touch the story in 2016 because they could not corroborate the dirt.

Monday, Hulu aired “Out of the Shadows: The Man Behind the Steele Dossier,” a show that features ABC’s George Stephanopoulos’ exclusive sit-down with Steele.

There was and is no evidence to back up the damning claim that the Kremlin had the goods to blackmail Trump. Former New York Times reporter Barry Meier says as much on camera, when he said of the story, “It never got any traction because no one could nail anything in it down.”

Days before Trump took the oath of office, Buzzfeed published the “dossier,” which was used to poison the White House well as Trump entered office.

Nearly two years later, the inspector general reported that the more salacious items in the Steele memos were “minimally corroborated,” that Steele’s source refuted his “pee tape” story, that contrary to Steele’s writing, Trump handler Michael Cohen did not meet Russian operatives in Prague, and Steele’s top source never spoke to a Russian official, as he claimed.

Still, the smear worked. After the report’s release, more Americans (48%) told Reuters/Ipsos that they believed Trump did conspire with Russians than not (40%).

The Stephanopoulos interview didn’t exactly clear up any questions.

Journalism students, take note. If, someday, you have a huge budget that will cover an exclusive interview in the United Kingdom with a public figure who won’t tell you anything new or newsworthy, this is how you make lemonade.

You get an exclusive with Steele, you grab it.

When Steele calls himself a “patriot” with “professional integrity and expertise,” you ask if he was acting as a patriot or paid political operative. He says patriot. Use that.

If you can’t squeeze a scoop out of it, you interview friends and relatives, throw in footage of yourself heading to the airport with a suitcase, and talk about Steele’s former employer, MI6, and Russian President Vladimir Putin, whom Steele may have met. Cue the “James Bond” tape. You place fellow ABC journos in empty rooms with one chair from which they speak so slowly and earnestly that viewers might conclude that what they are saying must be important.

ABC reporter Julia Macfarlane mused of the dossier’s leak, “It was 10 days before Donald Trump would be inaugurated as president of the United States. Everyone was asking the question. Are these claims true?”

And the answer is still: No.

“He doesn’t believe it either,” former Trump White House Deputy Press Secretary Steven Groves, now a fellow with the Heritage Foundation, said of Steele’s claims. Steele has to say that he believes his sources “to continue his private intelligence business.”

The former British spy manufactured false opposition research, Groves added, and tried to peddle it to the press and the FBI. His goal was to sic law enforcement on the GOP nominee.

“People should still be interested in that,” Groves added. “I mean, that’s election interference, my God.”