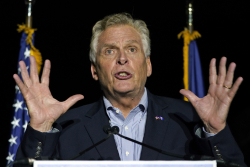 How do they do it? How do Democrats lie so effortlessly?

They claim that there is no open border when we watch nonstop video of illegal immigrants crossing the Rio Grande and being welcomed by Border Patrol agents who put them on buses and planes to settle throughout the country.

They claimed (and maybe still do!) that Hunter Biden’s laptop with incriminating evidence of illegal activity not just by Hunter but also by his father, Joe Biden, is Russian disinformation!

Remember when Biden stared into the camera and barked that the disastrous withdrawal from Afghanistan was an “extraordinary success”?

Most recently, some of the worst lies have been emanating from Virginia, where former Democrat Gov. Terry McAuliffe is in a tight race with Republican businessman Glenn Youngkin to see who will replace Ralph Northam as governor.

Because the race is the highest profile election prior to the 2022 midterms, it is being looked upon as a litmus test for how popular Democrat policies are now that Joe Biden has come out of the closet as a tyrannical socialist and globalist whose FBI wants to lock up moms and dads who protest at school board meetings.

The election is such an important off-year litmus test that Democrats will stop at nothing to win it. Their desperation was evident in a manipulative, lying ad paid for by VoteVets.org, a left-wing political action committee that tried to smear Youngkin by implying that he and his voters supported the Jan. 6 riot at the U.S. Capitol.

The ad itself contains the proof of its own deception. The U.S. flag is introduced by a speaker at the Oct. 13 “Take Back Virginia” rally as “an American flag that was carried at the peaceful rally with Donald J. Trump on January 6.” Yet the video then focuses instead on different flags used more than a mile away at the U.S. Capitol later the same day. It also suggests that Youngkin had endorsed the “Take Back Virginia” rally when, in fact, it was promoted completely independent of him.

What’s typical of Democrat politics is that the actual rally and the actual flag became irrelevant as soon as the VoteVets ad was created. Now, all that McAuliffe and his supporters need to talk about is the false narrative of the ad rather than what really happened at the rally.

“Morning Joe” co-host Willie Geist used the ad on the MSNBC show to introduce an Oct. 15 interview with Sen. Tim Kaine, D-Va., by claiming “attendees pledged allegiance to a flag organizers said was present at the January 6 attack on the United States Capitol.”

What? Even the ad itself admitted that the flag was not present at the attack, but rather was “carried at the peaceful rally” on the same day. But neither Geist nor Kaine  care about the facts. “Morning Joe” host Joe Scarborough doesn’t either. Four days later, while ostensibly interviewing McAuliffe, Scarborough provided cover not just for the flag lie but for multiple obvious falsehoods about Youngkin.

“He jumped out of all the debates,” McAuliffe told Scarborough about his opponent, mere seconds before admitting that Youngkin had actually appeared at two debates. He claimed that Youngkin was afraid to face the public, but ironically McAuliffe made the claim the day after he jumped up and left an interview with a local television  reporter in Northern Virginia because he was asked tough questions he didn’t want to answer.

McAuliffe brought up the “Take Back Virginia” rally and doubled down on the flag lie.

“It is like insanity down here in Virginia. They had a rally the other night … literally for Glenn Youngkin and the ticket, and they had a flag that was used on the January 6 insurrection, and they made everybody do the Pledge of Allegiance to that flag. I got to tell you … sickening, disgusting.”

To set the record straight, no one made anyone say the Pledge of Allegiance. Those in attendance did so because they love this country, and they never pledged to a flag used at the so-called insurrection but to an American flag raised up at a peaceful rally where tens of thousands of fellow Americans exercised their First Amendment rights to assembly and free speech.

But McAuliffe didn’t care, and he wasn’t done lying. He next said, “And then Donald Trump called in to the rally and said, ‘Glenn Youngkin will do whatever I want him to do.’”

That’s not remotely close to what Donald Trump said, and again if McAuliffe wanted to know what Trump said he would only need to watch one of his own ads, where he correctly quotes the former president as saying that Youngkin will “do all of the things that we want a governor to do.”

What you’d expect an actual journalist to do is follow up McAuliffe’s whopper with some version of this question:

“Actually sir, that’s not what Trump said at all, as you know. And to set the record straight for our viewers, that flag was used at the peaceful rally, not at the Capitol Hill riot. Why do you feel the need to lie about this?”

That’s what you would hope a representative of NBC News would say to a bloviating politician who was making up stuff as he went along, but if that happened — if Joe Scarborough actually did his job — then Terry McAuliffe would have jumped out of his seat and cut short the interview, just as he did the night before when he bailed out on the local TV interview.

Instead, Scarborough kept lobbing the softballs at McAuliffe, and set him up to deliver lie after lie. Most blatant, perhaps, was McAuliffe’s claim that “critical race theory is not taught in Virginia public schools.”

This was almost funny watching Scarborough try so hard to figure out why Youngkin is worried about critical race theory if it isn’t even taught in Virginia.

It never occurred to Scarborough to go with the most obvious conclusion — that McAuliffe is lying. I mean if Scarborough were a real journalist, he would already know that, but he’s not. He just plays one on TV.

It wouldn’t take long to find evidence that critical race theory is indeed taught in Virginia. The Fairfax County Times ran a long article in June by Elizabeth Schultz, a former school board member and U.S. Department of Education official, that smartly noted, “Yes, Virginia, there is Critical Race Theory in our schools.” She lays out chapter and verse of how this once-fringe theory is being peddled in Old Dominion schools, and how the moms and dads who protest are being purged.

But facts don’t matter on “Morning Joe,” and certainly not to Democrat politicians. McAuliffe just took the handoff from Scarborough and agreed that Youngkin and the other concerned citizens of Virginia are indeed nefarious.

“It really bothers me, Joe, when people and politicians do this to bring out the worst in people. He’s trying to stir up parents against parents, he’s using the students as political pawns … all to push his political agenda. It’s a racist dog whistle. … It’s sick, it’s sad.”

Most disgusting of all was when McAuliffe brought up the fact that Youngkin had criticized “George Soros-backed allies” in the “liberal progressive movement” who have “inserted political operatives into our school system” in order to push divisive agendas like critical race theory. Anyone who knows anything about the Hungarian-born billionaire knows that Soros has spent hundreds of millions of dollars to elect officials across the country who are dedicated to turning America into a post-constitutional republic. You would think it would be OK to say so, but because of a “politically correct” carve-out, Soros is off-limits from criticism.

Here, Scarborough again carried water on behalf of McAuliffe, implying that Youngkin is a bigot because he doesn’t approve of the worldwide campaign that Jewish-born Soros has engaged in to fundamentally transform Western civilization.

“That’s just the sort of anti-Semitism we’ve seen in the United States and across the world,” Scarborough said. “That’s what illiberal tyrants like [Viktor] Orban do in Hungary. They just lie about a Jew. They pick a Jew out. George Soros is that Jew, and so he’s playing that old anti-Semitic trope as well.”

The only trope I hear when I watch “Morning Joe” is the “Republicans are bigots” trope, along with the “Republican moms are domestic terrorists” trope and the “Democrats can do no wrong” trope.

To cement the role of the mainstream media as Democrat boosters, Scarborough returned like a dog to its vomit by bringing up the whopper of all Fake News lies — the “very fine people on both sides” canard that Democrats use when they falsely claim President Trump had said that some neo-Nazis are fine people.

As Steve Cortes demonstrated conclusively in a 2019 column at RealClearPolitics, Donald Trump never said that there were good people on the side of the neo-Nazis at Charlottesville. Here’s what he said about the riot when he defended the rights of “some very fine people” to protest against the removal of a statue of Confederate Gen. Robert E. Lee:

“I’m not talking about the neo-Nazis and white nationalists because they should be condemned totally.”

As Cortes noted in his RCP column, “For any honest person … to conclude that the president somehow praised the very people he actually derided, reveals a blatant and blinding level of bias. Nonetheless, countless so-called journalists have furthered this damnable lie.”

It should come as no surprise, therefore, that Terry McAuliffe bragged to Joe Scarborough that he has an ad running in which he once again lies about what President Trump said.

Terry McAuliffe can’t help himself. His state likes to claim that “Virginia is for lovers,” but come election time, Virginia is for liars, er, Democrats. But I repeat myself.