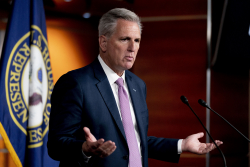 They were never horrified. Yet in nine months, congressional Republicans have retreated from some initial concern about the deadly Jan. 6 assault on the Capitol — when their House leader, Kevin McCarthy, assigned responsibility to then-President Trump — to making sure we learn as little as possible about what happened that day.

There are a handful of exceptions within their ranks, as we learned last week when seven House Republicans joined Reps. Adam Kinzinger and Liz Cheney, who serve on the select committee investigating Jan. 6, to support a contempt referral for Steve Bannon’s defiance of a subpoena. But those members had been told not to, and defied the wishes of their leadership.

Things have changed since the assault on the Capitol that may have led to the deaths of nine people and injured 140 police officers. For Republicans, there is now political danger in acknowledging the harms of that day. Not only has the event been shrugged off on the right, but a coverup is underway. Trump has successfully rebranded the insurrection as a “protest” and has labeled the Nov. 3 election last year “the insurrection.” Polls show Trump’s approval has rebounded and GOP voters now increasingly view Jan. 6 as no big deal and the fault of the Democrats and President Biden. That more than 600 rioters have been charged in the attack, largely citing Trump as the inspiration for their participation, is — to Republicans — just another meaningless “alternative fact.” Trump has also directed his allies, who know what he was and was not doing that day amid pleas for him to try and stop the violence, to blockade the investigation.

Though McCarthy originally criticized Trump’s role in inciting “mob rioters” and expressed support for a 9/11-style commission to examine the historic attack, he has since backed off in order to keep Trump happy and has instructed his rank-and-file members to do the same.

Cheney — who has said numerous times that her colleagues speak differently with her in private about Trump’s threat to democracy, the Big Lie he continues to spread about his election loss, and the insurrection — repeated last week that GOP members believe they cannot be seen as aiding an examination of Jan. 6.

“I’ve heard from a number of my colleagues in the last several days who say they, quote, ‘Just don’t want this target on their back.’ They’re just trying to keep their heads down; they don’t want to anger Kevin McCarthy … who has been especially active in attempting to block the investigation of events of Jan. 6, despite the fact that he clearly called for such a commission.”

Yet it should have been easy for any Republican to support contempt for Bannon. All they had to say was they intend to preserve the power of a co-equal branch of government that will, should they return to power in 2023, be a strong check on the Biden administration, and expect that any subpoenas issued to executive branch officials (or former ones) will be complied with. Rep. Nancy Mace, one of the nine, cited this reason for supporting contempt.

Republicans are well aware it’s not even likely Merrick Garland would prosecute Bannon since no criminal contempt referral has been prosecuted in decades. After all, they voted to hold Attorney General Eric Holder in contempt while he was attorney general in 2012, but now object to contempt for Bannon who was fired from the Trump administration several years before Jan. 6.

As the committee report stated: “There is no reasonable argument that Mr. Bannon’s communications with the President regarding January 6th are the type of matters on which privilege can be asserted.”

Rep. Peter Meijer, the first Republican to come out in support of impeachment for then-President Trump for incitement of the insurrection, tweeted after voting with the majority last week: “There is no conceivable interpretation of exec privilege that applies to someone outside of gov’t, conferring with senior gov’t officials, on non-official matters. Holding individuals who refuse to comply with congressional subpoenas in contempt is the sole recourse available to Congress to protect its power of inquiry.”

But Republicans knew this vote wasn’t about executive privilege, their role as members of Congress, right and wrong, or the rule of law. Rep. Jim Jordan made it explicit, saying, “You know what this is really about: getting at President Trump.”

In order not to risk Trump’s wrath, Republicans in Congress will instead risk losing non-tribal, swing voters who view Jan. 6 as a grave event and Trump’s embrace of the insurrection as a future threat to democracy. They’re gambling those voters will be indifferent to whatever the committee turns up about Trump and Bannon — all of which Trump will demand Republicans defend.

Should Republicans win that bet, and win next year, they can shut the committee down and put the insurrection behind them — at least until the next certification of electors in January 2025, when more violence can be expected. And we can conclude that in 2023, when they pursue oversight of the executive branch, congressional Republicans will not only be fine with Biden administration officials defying subpoenas from Congress, but that they won’t attempt to hold the recalcitrant parties in contempt.

A.B. Stoddard is associate editor of RealClearPolitics and a columnist.