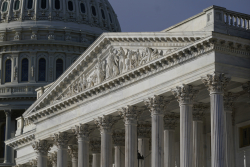 There has been heated debate in Congress over H.R. 1, a House bill that overrides state election laws by mandating a number of bad ideas including an automatic right to mail-in voting; the ability to drop ballots off at unwatched ballot boxes; and curtailing the ability of members of both parties to watch the counting of votes.

I oppose this bill because 1) if you need to show a government ID or driver’s license to fly on an airplane, you should need to show one to vote; 2) it gets rid of the secret ballot by encouraging campaign workers to knock on people’s doors, get them to vote with the campaign worker looking on — and with the campaign worker then offering to turn the ballot in; and 3) representatives of both parties ought to be able to watch votes being tallied. I support absentee ballots, but only when a voter gives a reason for needing one.

We chose to deviate from some of these principles in the 2020 national elections because of the COVID-19 epidemic.  Now that that epidemic is largely under control, we should return to secret ballots cast at the polls, by voters with a government ID, or by absentee ballot requested in advance (for a good reason) and accompanied by a government ID.  Democracy depends on the elimination of voting fraud, which is why H.R. 1 is dangerous and undemocratic legislation.

Congressional power to regulate congressional elections comes from Article I, Section 4, of the Constitution, which says: “The Times, Places, and Manner of holding Elections for Senators and Representatives, shall be proscribed in each State by the Legislature thereof; but the Congress may at any time by Law make or alter such Regulations, except as to the Places of chusing Senators.” There is nothing in this clause that allows Congress to regulate the selection of presidential electors or of state officers. Any federal law that purports to regulate presidential or state elections would be unconstitutional and, therefore, null and void.

Article II, Section 1, says that:  “Each State shall appoint, in such Manner as the Legislature thereof may direct, a Number of Electors” who together form the Electoral College, which elects the president. For years, many state legislatures themselves picked their state’s presidential electors, but a sound and worthy tradition has grown up since at least 1830 of states awarding all of their electoral votes to the winner of each state’s popular presidential election, with the voting rules for that election specified in advance by the state legislature.

Congress may be able under the Necessary and Proper Clause to require that state legislatures set the rules for selecting their presidential electors in advance of the election. Congress may also, as the Electoral Count Act purports to do, set dates for the casting of electoral votes in the states, and for the counting of those electoral votes by Congress. But, Congress has no power to tell a state who is eligible to vote in a presidential or state election.  (There are many scholars who think the Electoral Count Act is unconstitutional.)

What would be clearly unconstitutional, however, is for Congress to set national voting rules as to who is eligible to vote in presidential or state elections. The Constitution leaves that power exclusively to the states.