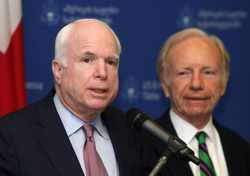 The following is excerpted from former Sen. Joe Lieberman’s “The Centrist Solution” How We Made Government Work and Can Make It Work Again,” new from Diversion Books.

In June, with the nomination clinched, John asked me to accompany him on a trip to Mexico and Colombia to highlight his foreign policy experience and his support of trade and immigration reform. We met the presidents of both countries, and visited some special local sites including the Basilica of Our Lady of Guadalupe in Mexico City, where we were hosted by a charismatic priest. At one point, the priest spoke with great passion and faith about the Virgin Mary. John must have worried I was feeling uncomfortable, because he interrupted the priest and said, “Monsignor, I don’t know whether you know, but Senator Lieberman is Jewish.”

“That’s wonderful,” the priest responded. “So was the Virgin Mary.”

If we weren’t in Mexico, I would have said, “Only in America”— but wherever, it was a memorable interfaith moment.

One day during the spring that year, Rick Davis, who was John’s presidential campaign chairman and longtime political confidant, called me:

“Senator, I have an interesting question for you. John wants to vet you for vice president. Are you okay with that?”

“Are you kidding, Rick?” I replied.

“No, I’m not kidding,” Davis chuckled. “John is serious about considering you as his running mate.”

I knew that presidential candidates sometimes vet someone for vice president as a thank you to that person to give him or her some favorable publicity, so my next response was, “John doesn’t have to do this to thank me for supporting him. We are too close for him to have to do that.”

“That’s not why he wants to vet you.”

“But,” I continued in disbelief, “I don’t know how he can do this. I got re-elected as an independent, but I am still a registered Democrat.”

“He knows all that but I can assure you he is serious about considering you and he has his reasons. So, is it okay if we put you on the short list to be vetted?”

I was still in a state of disbelief, but I said, “I can’t see how John can choose me, but if he wants to have me vetted, I will consent. It’s okay.”

“Great,” Rick said. “You will be hearing from A.B. Culvahouse who is chairing the VP vetting for us.”

A few days later, I joined John on his campaign bus and before anybody else got on, I told him:

“Rick called me and told me you wanted to vet me for vice president.” I was totally surprised, and honored, “But, Johnny, I don’t see how you could ever choose me.”

“Because I’m a Democrat and you’re a Republican.”

“That’s the point, Joey. People are fed up with all the partisanship in our government. Maybe a bipartisan national ticket is exactly what the people want and need.”

I said, I get it, I get it. And I admire you for thinking about the idea. It proves what a crazy maverick you really are. But please understand I don’t expect this to happen so, as you said to me when you asked me to endorse you in the New Hampshire primary, whatever you do will have no effect on our friendship.

Joe Lieberman, a former U.S. senator from Connecticut, is national co-chairman of No Labels, an organization working to create a new center in American politics that puts country before party.