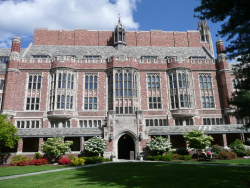 Many years ago, when I was a student at Yale Law School, the institution prided itself on providing a continuation of liberal education. I greatly valued the opportunity to supplement the standard legal studies curriculum with forays into the classics of English jurisprudence; explorations of different bodies of religious law and the interpretative traditions to which they gave rise; philosophical reflections on the limits of reason, legal and otherwise; and, in the effort to understand the intricacies of American constitutional law, readings in history, literature, political thought, and sociology. By going beyond the teaching of technical expertise in black-letter law, Yale enabled students to gain an appreciation of the place of law and the courts in a free and democratic society.

At the same time, worrying signs back then cast doubt on the strength of Yale Law School’s commitment to maintaining an atmosphere of free and open inquiry, a vital prerequisite of liberal as well as legal education. A progressive orthodoxy reigned at the law school. The majority — among students as well as faculty — seemed to regard the conservative viewpoint as an aberration to be frowned upon but which in small doses could be tolerated. Particularly in constitutional law classes, probing analysis of both sides of the argument tended to give way to advocacy for progressive outcomes. Some of my classmates were disposed to define race partly in terms of political opinions. According to their calculations, if a faculty member could not be counted on to affirm prescribed beliefs — on, say, abortion or affirmative action — then, for the purpose of measuring law-school-faculty diversity, that professor should not be classified as belonging to a historically disadvantaged group, regardless of the professor’s skin color, ethnicity, or sex.

Judging by the Trent Colbert affair, the worrying tendencies visible during my days at Yale have worsened considerably. Because of the school’s disproportionate role in training the nation’s law professors and judges, restoration on campus of the understanding and practice of liberty of thought and discussion is particularly urgent.

In mid-October, Aaron Sibarium reported in the Washington Free Beacon that Associate Dean Ellen Cosgrove and diversity director Yaseen Eldik pressured Colbert — a second-year student who is part Cherokee and is a member of both the Native American Law Students Association (NALSA) and the Federalist Society — “to apologize for a ‘triggering’ email in which he referred to his apartment as a ‘trap house,’ a slang term for a place where people buy drugs.” On Sept. 15, Colbert (he requested anonymity in the original version of the article for fear of retaliation) had used the NALSA listserv to email members an invitation to a Sept. 17 Constitution Day party organized in collaboration with the Federalist Society. In addition to using the term “trap house” — which has become common slang beyond its original meaning as a spot for doing drugs — Colbert wrote that Popeye’s chicken would be served. “Within minutes,” according to Sibarium, “the lighthearted invite had been screenshotted and shared to an online forum for all second-year law students, several of whom alleged that the term ‘trap house’ indicated a blackface party.”

Cosgrove and Eldik hastily summoned Colbert. At their Sept. 16 meeting, Eldik informed Colbert that his membership in The Federalist Society compounded the “trap house” offense and his mention of fried chicken, both of which invoked racial stereotypes. “The email’s association with FedSoc was very triggering for students who already feel like FedSoc belongs to political affiliations that are oppressive to certain communities,” according to Eldik. “That of course obviously includes the LGBTQIA community and black communities and immigrant communities.”

The aim of the meeting convened by the law school officials and of their subsequent communications with Colbert, however, was not merely informative. Cosgrove and Eldik urged Colbert to issue an apology, ominously suggesting that failure to do so would harm his reputation and interfere with his application to the bar. Eldik went so far as to draft an apology for Colbert; it was addressed to black law students, acknowledged “any harm, trauma, or upset” caused by his email, and stated that Colbert would “actively educate myself so I can do better.” After Colbert declined to send the ghost-written plea for forgiveness, Cosgrove and Eldik sent an email to all members of the second-year class that accused Colbert of using “racist language” and condemned his invitation “in the strongest possible terms.”

Shortly after publication of Sibarium’s piece on Oct. 13, the law school released a statement asserting that “Yale University and Yale Law School have strong free speech protections, and no student is investigated or sanctioned for protected speech.”

On Oct. 18, according to reporting in the Yale Daily News, you, Dean Gerken, sent an email to members of the law school community promising to “‘take any steps necessary’ to ensure that the Law School lives up to its values of free speech while still creating an inclusive environment for all students.” A law school that nurtures an environment hostile to free speech splits the community into belligerent factions while depriving students of the give-and-take of opinions and the reasoned evaluation of competing perspectives crucial to learning the law and maintaining a free society. Therefore, your readiness to take decisive action in support of free speech is welcome.

To assist you in ameliorating dispositions to take offense, chill protected speech, and censor that have gained a foothold at Yale, I offer three proposals to reinvigorate a culture of free speech at the law school and throughout the university:

First, Yale Law School should incorporate into entering students’ orientation a section on free speech and liberal education. The mini-course might assign Chapter II of John Stuart Mill’s On Liberty, “Of the Liberty of Thought and Discussion”; the 1974 Report of the Committee on Freedom of Expression at Yale, also known as the Woodward Report; and the 2015 Report of the Committee on Free Expression, also known as the Chicago Principles. These texts clarify the benefits of robust and open inquiry to individuals, free societies, and institutions of higher education, and sketch the virtues on which free speech depends. Yale Law School students should robustly and openly discuss them.

Second, Yale Law School should host an annual university-wide lecture on free speech. The lecture should be supplemented with a week of special programs, including a colloquium led by the university’s guest of honor as well as dinners for the guest with faculty and small groups of students. By annually spotlighting a lawyer, scholar, judge, elected official, activist, journalist, novelist, or some other figure who has contributed to the theory and practice of free speech, the law school would enhance appreciation of how communities constituted by the principle of free speech and therefore built around toleration are inherently inclusive. The law school would also convey to the campus community that the faculty and administration see free speech as vital to the law school’s and university’s mission.

Third, Yale Law School should host a regular debate series for the university community on leading issues in American constitutional law. All credit goes to the student-run Federalist Society for decades ago leaping into the breach to sponsor events featuring genuine exchange of opinion between right and left. However, by allowing the Federalist Society to achieve a near-monopoly in fostering vigorous debate on hotly contested issues, the law school sends the message that free speech is a partisan principle. This reinforces the pernicious yet increasingly popular notion that the vigorous presentation of the various sides of moral, political, and legal questions favors the majority at the expense of members of historically disadvantaged groups. In fact, it is difficult to identify a single victory for individual freedom and equality under law in the United States that did not rely on the generous free-speech protections provided by the U.S. Constitution.

Such steps will launch the hard work of re-grounding legal education at Yale in liberal education, and, it is to be hoped, will serve as a model for the university and higher education throughout the nation.

Peter Berkowitz is the Tad and Dianne Taube senior fellow at the Hoover Institution, Stanford University. From 2019 to 2021, he served as Director of Policy Planning at the U.S. State Department. His writings are posted at PeterBerkowitz.com and he can be followed on Twitter @BerkowitzPeter.