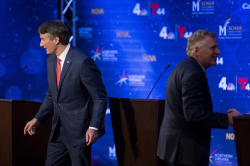 Dixville Notch, N.H., move over. Staunton, Va., is on course to be the G.O.A.T. for a locality picking the winner of major statewide elections.

With Election Day in Virginia upon us, political observers and analysts need to look no further than Staunton, the birthplace of former President Woodrow Wilson. Voters in this college town of 25,000 residents nestled in the Shenandoah Valley and filled with independently owned small businesses have an unmatched record of forecasting the eventual statewide election results.

Since 2008, voters in Staunton have accurately selected the winner in major statewide elections. Even more impressive, voters have paralleled the statewide margin of victory and actual percentage vote received by both the Republican and Democratic nominees and third-party candidates.

Polls this year report a virtual tie between Democrat Terry McAuliffe and Republican Glenn Youngkin.  While there is little dispute that President Biden’s growing disapproval is putting Democrat candidates at a deficit, there is mounting evidence that the Youngkin campaign learned a valuable lesson from the 2020 elections, which shaped its tactics.

Voters who cast ballots for Republicans have just as favorable view voting early as those who cast ballots for Democrats. This year shows no tangible evidence that Republicans fear or distrust participating in early voting.  Moreover, no one is discouraging them from doing so.  In fact, the Youngkin campaign has plenty of staffers, activists, and volunteers working to get supportive voters to cast their ballots.

The trend toward Youngkin has occurred and been widely reported by the media while voters have cast their ballots. Voters are influenced by the “who is leading” and “who is going to win” element of elections. In the final days, this element has an impact as it amplifies or depresses enthusiasm. For months, Democrats have been hindered by the gap in enthusiasm between Youngkin voters and McAuliffe voters.  The recent Christopher Newport University poll revealed that 80% of Republicans are enthusiastic about voting for their candidate, while only 65% of Democrats feel the same, a hardy 15-percentage-point difference.

All of this is on top of the Newport poll which had Youngkin winning two-thirds of the votes of those intending to vote on Election Day.  A math expert is not needed to see those numbers would mean a comfortable victory for Youngkin.

As an aside, if anyone doubted that national Democrats fear a bad election outcome in Virginia, ask yourself why it is, amid all the confusion and rancor within the ranks of congressional Democrats, that Speaker Nancy Pelosi has suddenly decided that Nov. 2 would be a good day to take the vote on the $1.75 trillion spending package.

At multiple levels, it seems Republicans have learned some lessons from 2020, even if they are painful lessons.  Meanwhile, Democrats appear to be stuck in place, using an old playbook.  After spending millions of dollars telling voters that Youngkin is a clone of former President Trump, McAuliffe suddenly declared in a weekend interview that “the election is not about Trump.”  He did not even blush when he said it.  Voters notice these changes in narrative.

No Republican should start counting the eggs as actual chickens.  There have been too many close calls in the past two decades where Republicans came up short.  At the same time, Tuesday might be a good day to drive down the Blue Ridge Parkway and see the results in Staunton.

David Avella is chairman of GOPAC and a veteran Republican strategist.