At The Washington Post, when Democrats are kicked unceremoniously out of office, it can only mean one thing. Democracy died in darkness.

Take Stephen Sweeney, the powerful Democrat leader of the state Senate in New Jersey. Absolutely no one thought he would lose to a Republican who was a trucker who had a tiny campaign treasury. 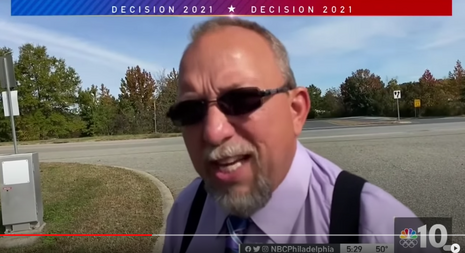 Paul Farhi, a veteran media reporter at the Post, diagnosed the problem in a story headlined “How the media missed a New Jersey senate candidate’s racist social media posts — until he’d already won.” A more accurate headline would be “How the media failed to help a Democrat win (because no one thought he would lose).”

Farhi insisted Ed Durr “had a history of posting bigoted, misogynistic and derogatory comments on social media.” Like what? None of Durr’s tweets were quoted in full by Farhi, and Durr quickly deleted his Twitter account, so a lot of context is missing.

1. “Mohammed was a pedophile!” he tweeted in 2019 in a tweet and also described Islam as “a false religion” and “a cult of hate.”

Mohammed, according to Islamic writings, married a child bride, six years old. But the Post seems upset that Islam is being criticized at all. Is it “racist” or “bigoted” to say there’s such a thing as a “false religion”? Muslims believe other faiths are false, to put it mildly. Christians believe other faiths are false. That’s why they have their own faiths. “Cult of hate” is harsh, but it sounds pretty close to how the Post describes die-hard Trump fans.

So it’s “racist” to identify the virus from where it originated. Journalists began the pandemic saying “Wuhan virus” and so on, until they were told it was racist, and then they became adamant that no one could insult communist China for loosing a deadly pandemic on the world.

3. Durr blamed an “influx of #illegalAliens” for spreading disease.

The Post thinks it’s racist to be concerned about immigrants flooding across the border with no coronavirus screening. It’s the only time liberals seem to get incredibly cavalier about COVID. It’s also considered “racist” to say “illegal aliens.”

4. This one is both “bigoted” and “misogynistic,” apparently. Durr “denigrated Vice President Harris on Facebook, writing she had earned her position only as a result of race and gender.”

Everyone with a political pulse knows the leftist base of the Democrat Party demanded Biden nominate a Woman of Color. So apparently the mortal sin here is using the word “only.” But if Kamala Harris was a white guy named Karl, the other attributes wouldn’t matter, either.

Farhi explained that a database search found that no one reviewed Durr’s social-media statements in any of his campaigns in 2017, 2019, and 2021. He also lamented that the media in southern New Jersey is being eviscerated by economic trends.

But he also noted that powerful Senator Sweeney failed to research his opposition. “Reporters often rely on leaks of damaging information,”  he wrote. Yes, especially if both the reporter and the candidate are Democrats, as is often the case.

The Post didn’t seem to think this through the other way. If Sweeney had won easily, they would file no story complaining about the decimated media in south Jersey. They would have never found an objectionable tweet from obscure Ed Durr.

But with this lament, they have told us all they can’t imagine voters making a decision without heavy influence from the media, and the decision to dump a powerful Democrat is somehow a failure of local journalism.