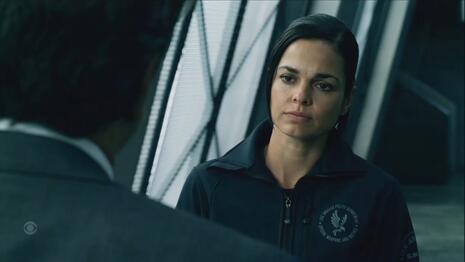 This week’s episode of CBS’s S.W.A.T. made the ridiculous claim that “sensible gun control” would stop guns being aimed at cops, ignoring the fact that a majority of criminals use illegally acquired weapons.

In the episode, “Crisis Actor,” on Friday, November 12, armed gunmen storm the set of an Alex-Jones style show that spread a false story claiming a school shooting of kindergartners was a hoax.

Parents of the dead children, and a parent-sympathizer named Arnold (Joshua Dov), attack the set of the show and threaten guests with guns. One of the guests, Andrea (Ellie Araiza), shoots at Arnold and is injured as a result before S.W.A.T. arrives on the scene to de-escalate the situation.

Chris: Good guy with a gun argument makes me mad. I mean, look what happened to that woman Andrea. She tried to take on a bad guy with a gun, and got a bullet through her chest. She’ll probably be eating through a tube for the rest of her life.

Deac: Yeah, and if she hadn’t been armed and taken that shot, Arnold might have killed everyone in that studio.

The show’s producer, Jeffrey (Joseph Lyle Taylor), asks Chris if she would like to come on the show now that she is trending under the hashtag #HotSWATcop.

Jeffrey: I wanted to know if you’d be interested in coming on the show this afternoon. Our viewers are big, big fans, and you got yourself quite a following already. And a hashtag: #Hotswatcop. You know, people want to know more about the officer who saved our butts.

Chris: I didn’t do it alone.

Jeffrey: Yeah, but you’re a woman. People like that. It’s different. You look great in that uniform, too. You should really move these five minutes of fame into something. I mean, these opportunities don’t come around too often.

Jeffrey: You sure? I think you’d make a perfect spokesperson for gun rights. People want to hear from law enforcement.

Chris: Most cops believe in the second amendment, but they also believe in sensible gun control laws. You want to know why? MM. ‘Cause a lot of the times those guns are aimed at us.

Chris’ claim is ridiculous. The guns aimed at cops are mostly illegal and no so-called “sensible” gun control law would stop that. But Chris is one of the most consistently left-wing mouthpieces on S.W.A.T. She tried a polyamorous relationship in a past season and this season went radical feminist, complaining that male standards of physical strength should not be applied to female S.W.A.T. Academy applicants.

It is no surprise that her character would be the voice for the left-wing myth that gun control laws somehow make cops safer rather than merely making potential victims less able to defend themselves.

Nonetheless, it is fascinating to see a television script pretending to care about the well-being of cops again, considering Hollywood spent all last season vilifying them, including S.W.A.T. In this episode, at least, promoting the disarming of American citizens outweighs attacking the cops who protect them.

This rant was brought to viewers in part by Trulicity, Entresto and Olay. You can fight back by letting these advertisers know what you think of them sponsoring such content.