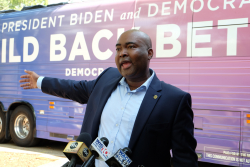 He’s not particularly close to the White House. He’s never won statewide office or a seat in Congress. And just last year, he lost a high-profile Senate race by double digits.
But if you ask him, Jaime Harrison will tell you he is uniquely prepared to lead a Democratic Party confronting fierce Republican obstruction, intense infighting and the burden of history heading into next year’s midterm elections.
He will tell you of his own childhood of poverty in rural South Carolina, where he ate cereal with water instead of milk before eventually becoming an attorney, a congressional aide, the…