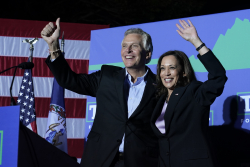 In the aftermath of their defeat in Virginia, a few, mostly older liberal commentators have begun warning about the Democratic Party’s leftward drift on cultural issues. Some have criticized Democrat candidate Terry McAuliffe for his failure to distance himself from the far left on CRT or the transgender bathroom and sports issues that had inflamed parents in Virginia schools.