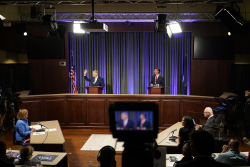 When failed Virginia gubernatorial candidate Terry McAuliffe defiantly announced during his campaign that he didn’t want Virginia’s parents making their “own decisions” regarding their children’s education, he sealed his political fate. McAuliffe smugly said during a televised debate – “I don’t think parents should be telling schools what they should teach.”
Wrong answer, and he lost his quest for a second term as governor in part because of that short-sighted statement.
Parental concerns over the quality and focus of public school education are skyrocketing. Education is now a top political…