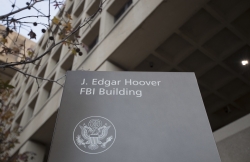 Millions of citizens long ago concluded that professional sports, academia, and entertainment were no longer disinterested institutions, but far Left and deliberately hostile to Middle America.
Yet American conservatives still adamantly supported the nation’s traditional investigatory, intelligence, and military agencies – especially when they came under budgetary or cultural attacks.
Not so much anymore.
For the first time in memory, conservatives now connect the FBI hierarchy with bureaucratic bloat, political bias, and even illegality.
In the last five years, the FBI was mostly in the news…