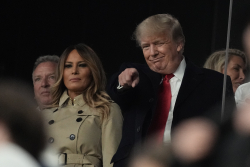 If Donald Trump tries to run for president again, one of his former campaign advisers has a plan to dissuade him. Anticipating that Trump may not know who Adlai Stevenson was or that he lost two straight presidential elections in the 1950s, this ex-adviser figures he or someone else might need to explain the man’s unhappy fate. They’ll remind Trump that if he were beaten in 2024, he would join Stevenson as one of history’s serial losers. "I think that would resonate," said this person, who, like others, spoke on condition of anonymity to talk more freely. "Trump hates losers."