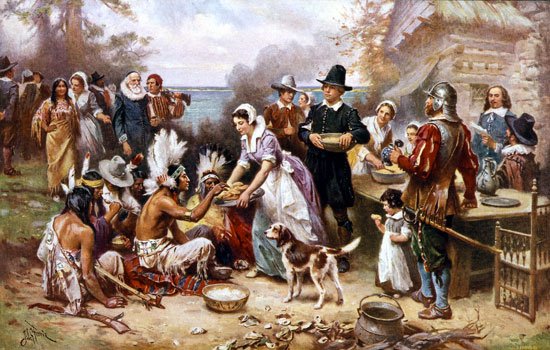 [Millions of school children have been taught the revisionist history that the first Thanksgiving was about the Pilgrims giving thanks to their Indian neighbors for saving them from starvation. Around this time of year, an historically accurate account of the first Thanksgiving was told on national radio. A few years ago, I compiled a lightly-edited transcript of that account, which appears below. Please enjoy and share “The True Story of the First Thanksgiving,” as it was narrated each November by the late nationally-syndicated radio host, Rush Limbaugh.]

The story of the Pilgrims began in the early part of the seventeenth century. The Church of England under King James I was persecuting anyone who did not recognize its absolute authority. Those who demanded freedom of worship were hunted down, imprisoned, and sometimes executed for their beliefs. A small group of separatists fled to Holland, where they established an outpost.

A decade later, about forty of the separatists decided to embark on a perilous journey to the New World, where they could live and worship God according to the dictates of their own conscience. On August 1, 1620, the Mayflower set sail from Plymouth, England carrying a total of 102 passengers, including forty Pilgrims led by William Bradford. On the journey, Bradford set up a contract that established laws that would govern the new settlement. The values and principles set forth in the Mayflower Compact were derived from the Bible.

Because of an unshakable belief in Divine Providence, the Pilgrims never doubted that their bold experiment would succeed. But their journey to the New World was long and arduous. When they landed in America, they found, according to Bradford’s detailed journal, a cold and desolate wilderness. There were no friends to greet them, he wrote, or houses to shelter them. There were no inns where they could find temporary lodging and no trading posts where they could buy food and other necessities. The numerous hardships they would encounter in the name of religious freedom were just beginning.

During the first winter, half of the Pilgrims, including Bradford’s wife, perished from starvation, sickness or exposure. When spring came, Indians taught the settlers how to plant corn, fish for cod and skin beavers for coats. Life improved on the margins, but the colony was still a long way from assured survival.

The original contract the Pilgrims entered into with their merchant sponsors in London called for everything they produced to go into a common store, with each member of the settlement entitled to one common share. All land they cleared and all houses they built belonged to the community. The plan was to distribute everything equally. No colony member owned anything beyond a proportionate share of the common output. Under this communal living arrangement, the colony’s most industrious members lacked incentive to produce as much as they could.

Soon, it became obvious that the collectivist system was not yielding enough food. Faced with mass starvation, Bradford decided on bold action, and assigned each family its own plot of land. With private property rights and personal incentive in play, food production began to soar. The Pilgrims scrapped the collectivist system that almost led to their demise. What Bradford wrote about the colony’s near-disastrous experiment in communal living should be taught to every child in America:

“…. this community was found to breed much confusion and discontent, and to retard much employment that would otherwise have been to its benefit and comfort. Young men that were most able and fit for labor and service did repine [complain] that they should spend their time and strength to work for other men’s wives and children without compensation.”

Under the new arrangement, every family was permitted to sell its excess crops and other products. The result? “This had very good success,” wrote Bradford, “for it made all hands industrious, so more corn was planted than otherwise would have been.”

With an abundance of food at hand, the Pilgrims set up trading posts and began to exchange goods with the Indians. The profits they earned enabled them to pay off their debts to their sponsors. News of the settlement’s prosperity attracted other Europeans, and precipitated what came to be known as The Great Puritan Migration.

Many of America’s schools incorrectly teach that the first Thanksgiving was an occasion where grateful Pilgrims thanked the Indians for saving them from starvation. But the true story of Thanksgiving is that of William Bradford giving thanks not to the Indians, but to God for the guidance and inspiration to establish a thriving colony, one that enabled the Pilgrims to generously share their plentiful bounty with their Indian neighbors at that first Thanksgiving.

Omitted in many classrooms is the historical fact that it was not Indians who saved the Pilgrims. Rather, it was free enterprise capitalism and Scripture, the latter of which was acknowledged on October 3, 1789 by America’s first president in his Thanksgiving Proclamation, a short historical document that every school child should read.

Image by GDJ at Pixabay.