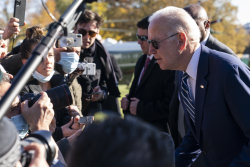 If you have any doubt about whether the White House press corps has a different standard for President Joe Biden than for former President Donald Trump, consider the press briefings that followed their first physicals as president at Walter Reed National Military Medical Center. Biden’s physical occurred Friday.
On reflection, Team Trump was too transparent when then Press Secretary Sarah Sanders brought Ronny Jackson, then physician to the president, to the briefing room podium where he answered press questions for nearly an hour in January 2018.
Here’s a sampling of some of the more…