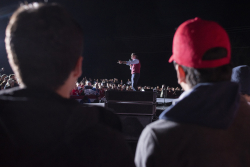 I received a phone call on my radio show from a man who said, “Dennis, I’m a gay conservative actor in Hollywood, and it is far easier to come out of the closet as gay than as a conservative.”
That call was in the 1980s.
While the current cancel culture — the firing, humiliation, disparagement and smearing — of conservatives is exponentially worse today than 30 years ago, it is not new.
As a result, the great majority of Americans who are conservative — that is, about half the country — hide their true beliefs. They fear saying anything that differs with the Left. This would include such…