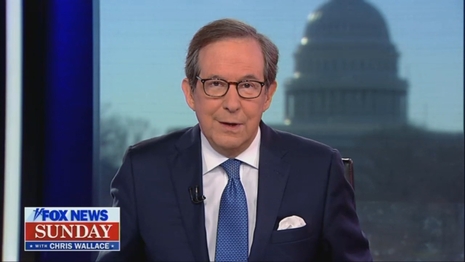 UPDATE: According to Mediaite and Variety, Chris Wallace would be joining CNN following his departure from Fox News and Fox News Sunday. Check below for more information.

At the end of his show, Fox News Sunday host Chris Wallace announced that after 18 years, he would be leaving his show to cryptically pursue an endeavor “beyond politics” and for his own interests. An endeavor he described as a “new adventure.” But according to new reporting, he seemed to be jumping ship to swim over to CNN.

According to reporting from Variety, “A person familiar with the matter suggested Wallace may be jumping to CNN Plus.” This was later confirmed by Mediaite. “Chris Wallace is leaving Fox News. He is set to join CNN’s soon-to-launch streaming platform CNN+, as first reported by Variety and confirmed by Mediaite,” wrote Joe DePaolo.

“Finally, a personal note,” he declared after speaking about an experimental medical treatment using pig organs for human transplants. “After 18 years. This is my final Fox News Sunday. It is the last time – and I say this with real sadness – we will meet like this.”

Wallace didn’t seem to be bitter or angry with his employer. In fact, he praised his bosses for letting him run the show the way he wanted:

18 years ago, the bosses here at Fox promised me they would never interfere with a guest I booked or a question I asked. And they kept that promise. I have been free to report to the best of my ability to cover the stories I think are important, to hold our country’s leaders to account.

He reminisced and thanked his audience:

And I’ve gotten to spend Sunday mornings with you. It may sound corny, but I feel we built a community here. There’s a lot you can do on Sunday mornings. The fact you’ve chosen to spend this hour with us is something I cherish.

“But after 18 years, I have decided to leave Fox. I want to try something new; to go beyond politics to all the things I’m interested in. I’m ready for a new adventure. And I hope you’ll check it out,” he said. “And so, for the last time, dear friends, that’s it for today have a great week. And I hope you’ll keep watching Fox News Sunday.”

Wallace’s recent years with the network were a bit of a mixed bag. In October of 2020, Wallace complained on Fox News Channel about former President Trump’s conduct during the debate he moderated, equating it to Trump stomping on his cake:

And I felt like I had gotten together all of the ingredients. I had baked this beautiful, delicious cake. And then, frankly, the President put his foot in it. And that was frustrating, because — frustrating for me, because I tried hard to prepare for a serious debate.

But he held the Democrats to account too. Back in April, he confronted Transportation Secretary Pete Buttigieg about President Biden’s proposed infrastructure slush fund. Asking, “Why mislead folks” about how many jobs it will create?

He also called out machinations from President Biden and radical Democrats for their “anti-constitutional” and “bone-headed” plan to pack the Supreme Court.