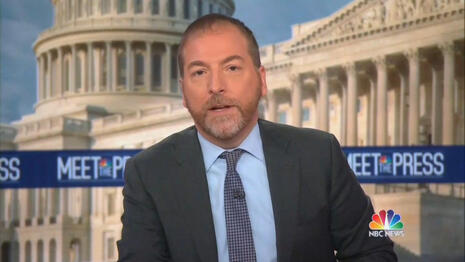 On Sunday, Fox News Associate Editor Lindsay Kornick reported on how NBC’s Meet the Press host Chuck Todd “appeared to defend President Joe Biden from his low approval rating during Sunday’s show.” Kornick pointed out: “Recent polling numbers have shown Biden at approximately 42% approval, with his disapproval at 52%. Certain polls over the last few months have put Biden’s rating as even lower.”

“However, Todd pushed the idea that these poor numbers were due to situations out of the White House’s control rather than being largely due to Biden’s policies,” the article explained before quoting Todd’s excuse-making: “It seems as if there’s nothing the White House can do to improve their political standings these days. It does feel like every week there’s a new poll, there’s a new bottom, a new this. And some of it is out of their control.”