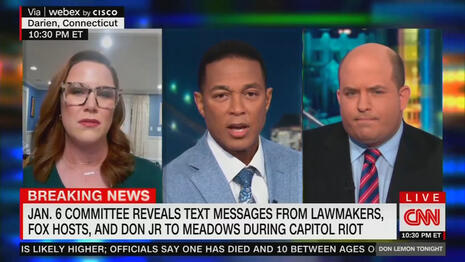 On Tuesday, The Right Scoop reported on CNN demanding Fox News be banned from covering the White House: “Last night Don Lemon pressed his colleagues on CNN about Fox News, asking why Jen Psaki continues to call on the network and why they should even be allowed in the briefing room.”

The article explained how “This segment comes after it was revealed last night that several Fox News hosts, including Laura Ingraham, Sean Hannity and Brian Kilmeade, all implored Trump on January 6th to tell people to stop the riot.” The piece observed: “Because of these text messages CNN is now impugning Fox News as though they did something wrong….these CNN nutjobs treat Fox News like it was the cause of the riot and now want to throw them out of the briefing room.”

Read the full article on The Right Scoop.