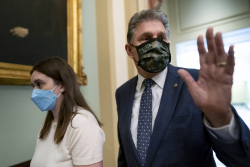 If Joe Biden’s social-spending agenda goes down in flames, as appears to be the case, he has only himself and members of his party to blame.
After months of painstaking negotiations among moderates and progressives in the Democratic Party, this fall Biden announced a “framework” for his multitrillion-dollar Build Back Better bill. The tentative deal was supposed to break a legislative logjam that was holding up a separate trillion-dollar infrastructure bill, while also setting up passage of the larger package on a party-line vote.
Biden focused most of his sales…