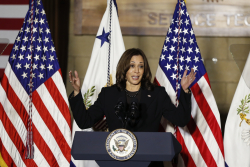 Here’s a depressing thought. The three people most likely to appear at the top of the November ballot in 2024 are President Joe Biden, Vice President Kamala Harris and former President Donald Trump.
If Biden, who turns 80 next year, declines to run for a second term, the net contest could be 2016 all over again, when many voters had to choose between two unlikable nominees, Trump and Hillary Clinton.
On paper, Harris, 57, looks better than in person. A former district attorney, state attorney general and U.S. senator — Harris’ resume would impress even if she wasn’t the first woman of color…