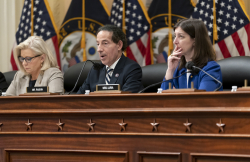 The issue of our age is: Why are so-called liberals incapable of recognizing the true enemies of democracy, and how far will they go to delude themselves?
They are the modern equivalent of the Inquisition, that group of know-it-all Catholic clerics who actually knew next to nothing but were perfectly willing to bet their eternal souls on their dogma. They had no problem locking up Galileo or Copernicus for claiming the earth revolved around the sun or burning Giordano Bruno at the stake for daring to be right about distant stars and the infinite universe.
Likewise, the nightly inquisition…