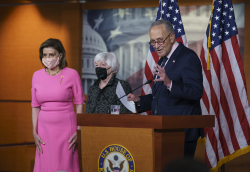 The "real story" on how and why Senator Joe Manchin bailed on Build Back Better (BBB) is the hottest topic in DC this week. The West Virginia senator argues that every Democratic leader, from the White House on down, knew of his reluctance to support this "mammoth piece of legislation" and as such shouldn’t be surprised or shocked by his decision. The White House, meanwhile, said in a statement on Sunday that his decision "represent[s] a sudden and inexplicable reversal in his position, and a breach of his commitments to the President and the Senator’s colleagues in the House and Senate."