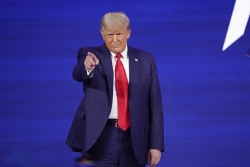 Take it from another man in exile. "I’m trying to tell President Trump, run on your record," former Fox News bigwig Bill O’Reilly said this week. "He’s going to run again, all right." The duo appeared together over the weekend at an unwieldy event in which the former president sparred with his own supporters over vaccine politics. After saying that he got the booster, a section of the audience can be heard booing Trump.