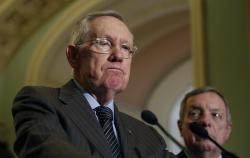 Former Sen. Harry Reid, the Nevadan who led Senate Democrats for 12 years this century including eight as majority leader, died Tuesday following a lengthy battle with pancreatic cancer. As the famously blunt, terse, and oftentimes unintentional master of dry comedy told the New York Times a couple of years ago, "As soon as you discover you have something on your pancreas, you’re dead." His passing, at 82, came a couple of weeks after Las Vegas’ airport, for which he secured a ton of money during his time, was renamed after him.